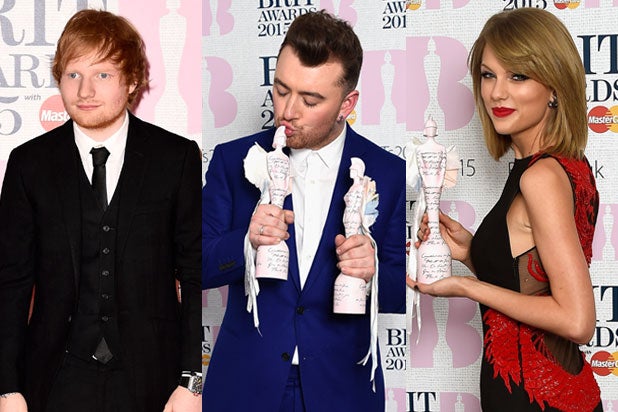 Ed Sheeran, Sam Smith, Taylor Swift and Pharrell Williams were among the big winners at Wednesday’s Brit Awards, the U.K.’s version of the Grammys.

But the show garnered less attention for its awards than for the fact that Madonna fell backwards down a flight of stairs during her performance of “Living for Love.”

Smith, who won four Grammy Awards on Feb. 8, lost in the British Male Solo, British Single, British Album and British Video categories, but he was named the British Breakthrough Act of the year, and was also given the Global Success award.

Swift and Williams were named the top international artists, while the Foo Fighters won the award for the best international group.

While Swift was among the many performers on the show, Williams won his award while he was in a Los Angeles courtroom for the copyright trial over his and Robin Thicke’s song “Blurred Lines.”

Awards for the top British male and female artists went to Sheeran and Paloma Faith, while the award for British group went to Royal Blood (setting off a storm of complaints from One Direction fans on Twitter, who were partly appeased when the band won the best video award).

The Brit Awards have been handed out since 1977, and this year took place at the O2 Arena in London and streamed live on YouTube.

The nominees and winners:

The late comedienne's legacy lives on. She was posthumously awarded the Grammy for Best Spoken Word Album for “Diary of a Mad Diva” in a ceremony prior to Sunday's show. The album is the audio version of the late comedienne’s 12th book.