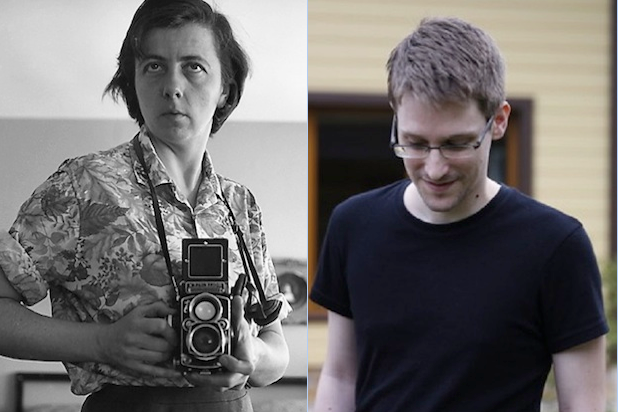 Laura Poitras’ Edward Snowden documentary “CitizenFour” and John Maloof’s and Charlie Siskel’s investigation into a neglected photographer, “Finding Vivian Maier,” are among the five nominees for the year’s best documentary at the International Documentary Associations IDA Awards, the IDA announced on Wednesday.

Also nominated were Marshall Curry’s portrait of an American filmmaker who fought and was imprisoned in Libya, “Point and Shoot”; Wim Wenders’ and Juliano Ribeiro Salgado’s look at Salgago’s photographer father, “The Salt of the Earth”; and Nick Broomfield’s “Tales of the Grim Sleeper,” the British documentarian’s investigation of a series of murders in South Central Los Angeles over a 25-year period.

The nominations were made by a jury, after screening panels had narrowed down about 250 qualifying films to a couple dozen finalists. The number of eligible films tops the Oscar-qualifying slate by about 100 docs.

Missing from the top feature category were a number of the year’s lighter, more crowd-pleasing documentaries, including Steve James’ Roger Ebert memoir, “Life Itself,” as well as the music-themed films “Glen Campbell: I’ll Be Me,” “Elaine Stritch: Shoot Me” and “Keep On Keepin’ On.” The last of those films was, however, nominated for the Humanitas Award.

“Finding Vivian Maier” also won the award for Best Writing, one of the four Creative Recognition awards announced on Wednesday. Others went to “Elevator” for cinematography, “Last Days in Vietnam” for editing and “Alfred and Jakobine” for music.

In the television categories, nominations included “COSMOS,” “The Sixties” and “Years of Living Dangerously” in the Best Limited Series category, “Anthony Bourdain Parts Unknown,” “Morgan Spurlock Inside Man” and “VICE” for Best Episodic Series and “A Short History of the Highrise” and “Op-Docs” for Best Short Form Series.

The IDA Documentary Awards are one of the main honors given to non-fiction filmmaking; most years, two of the IDA’s five nominees go on to receive Oscar nominations.

In recent nominations for the Gotham Awards, “CitizenFour” and “Point and Shoot” were joined by “Actress,” “Manakamana” and “Life Itself.”

Nominations for the Cinema Eye Honors, the other top award for non-fiction filmmaking, will be announced on Nov. 12.

The IDA Documentary Awards will take place on Friday, Dec. 5 at the Paramount Theater on the Paramount Studios lot in Los Angeles.

“A Short History of the Highrise”
Executive Producers: Jason Spingarn-Koff, Silva Basmajian
National Film Board of Canada and The New York Times

“How I Got Over”
Director: Nicole Boxer