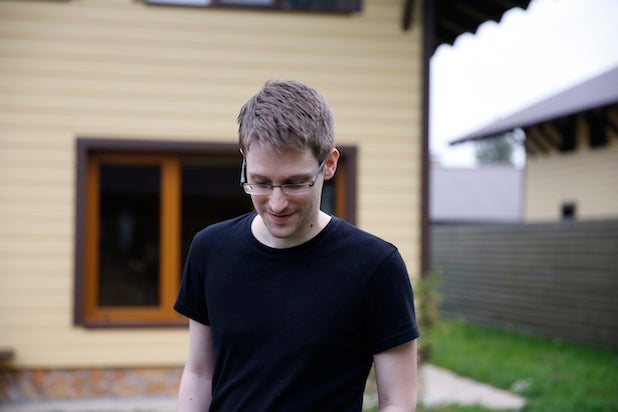 If the U.S. government doesn’t like Laura Poitras’ new documentary about Edward Snowden, “CitizenFour,” it only has itself to blame.

Poitras, after all, came to the government’s attention after she made the Oscar-nominated 2006 documentary “My Country, My Country,” about the cost of the Iraq war on U.S. troops and on Iraqis. Her activities making that film put her on a watch list, which for years caused her to be detained for hours whenever she tried to enter the country. To protect her sources from the government confiscating her computer equipment, she learned to use sophisticated encryption technology.

And that’s why, when in early 2013 Poitras got an anonymous email from a government worker who wanted to spill the beans on the National Security Agency’s massive domestic and international spying program, she knew enough about security to communicate with him at a level of secrecy he was comfortable using.

The source turned out to be Edward Snowden, who gave Poitras documents that exposed a staggering level of surveillance of American citizens and foreigners. And subsequent meetings in a Hong Kong hotel room between Snowden, Poitras and journalist Glenn Greenwald (who Snowden originally approached, but who didn’t have sophisticated enough encryption technology) led to a series of blockbuster articles in The Washington Post and The Guardian, a George Polk Award and a Pulitzer Prize for reporting to which she was a contributor.

Now they’ve also led to “CitizenFour,” a documentary that puts viewers on the receiving end of the first emails that Snowden sent to Poitras, and also in the hotel room when he made his revelations. The film premiered at the New York Film Festival to raves, and opens in limited release on Friday. Poitras spoke to TheWrap ahead of the film’s release.

TheWrap: At one point in your film, you show 2013 footage of President Obama saying that the information about NSA surveillance should not have come out in the way it did, but that it’s good to have a conversation about it. Have we had that conversation at the governmental level?
Laura Poitras: I don’t think so. There have been reviews and recommendations, but I don’t think there has been substantive change. But I do think that there’s been a shift of consciousness around these issues, both in the U.S. and internationally. We’re seeing tech companies realize that their business has been hurt by these exposures — that if you trust your data to an email provider and that data is then going to be given to the government, that’s not good for their business model.

So I think we’re seeing tech companies thinking about how to offer privacy to customers. And the truth is, if encryption were to filter down and become easier, then more people will use it and more people will be assured of having communication that’s private.

But in terms of the policy level, no. Most people who think about these issues realize that we can’t trust policy to be the divide between whether they can suck up everything or whether there are checks and balances. There need to be policy and legal constraints, but there also need to be technological constraints.

But that’s a rough idea — that it’s our duty to use encryption to protect ourselves from the snooping of our own government.
Honestly, everyone who uses the Internet uses encryption every day. When you go to your bank [website], you don’t want to broadcast your password and your bank balance. You’re using encryption.

And in terms of email, it’s not that hard. It should be as behind-the-scenes as when you go to your bank. I think that we’ll see that, and I think it’s going to be a given that people are going to want privacy, and companies will offer tools for that.

“CitizenFour” isn’t an activist documentary that says, “Here’s what you need to do to help solve this problem.” But do you think of the film as a way to apply pressure and bring about change?
For me, it’s obviously a film about the dangers of mass surveillance. And it’s also a film about journalism and threats to journalism, and a film about sources and threats to sources who come forward to expose government wrongdoing. But I don’t make films with an agenda. I make films because I want to make cinema, and I want to do something that’s lasting. So I try not to think of films as a means to an end. I think they’re an end in themselves.

This has been described as the last part of a trilogy, beginning with “My Country, My Country” and then “The Oath.” But at the time you made the first of those films, I doubt you were thinking, “OK, post 9/11 America is going to be my subject for a few films now.”
No. In 2004, when I started that film, I thought I was just making a film about the Iraq war. I thought that the idea of using preemptive military force because you thought a country might do wrong and set a really frightening precedent, and I wanted to document that. And also understand the war on the ground, both for the military and for Iraqis. But I didn’t think I’d be sitting here 10 years later talking about the same topic.

When I started, I was naïve. I thought these abuses [of the early Iraq war] would be reined in — and then when I was editing that film, I was shocked that Guantanamo was still open. This was in 2005. So I thought, OK, the next thing I’m going to do is about Guantanamo, and that’s when it turned into a series of films about the post-9/11 era.

And somehow, it’s gone from my relationship to the things that I’ve been covering, from trying to understand them from a human perspective, to becoming part of the story.

Do your instincts as a journalist tell you not to make yourself the story?
In this case, no. Snowden contacted me. It was pretty self-evident that I had participated in these events, and it had to be told from a subjective point of view. But that doesn’t mean that it’s not still journalism. Just because I’m telling it from a subjective point of view, it also needs to be told with the same fact-checking, journalistic responsibility that you had in any other films I’ve done in the past.

What was your reaction when you started getting the emails from Snowden?
I was thinking, wow, this is really staggering — both what I am hearing, and the risks that were being taken. I felt that if the source was legitimate, these were dangerous waters, that we were going to anger people that were very powerful.

How much danger did you feel for yourself at that point?
The period before Hong Kong felt like the most dangerous period to me. That was the period where Snowden had taken enormous risks, but I hadn’t received any information yet. I felt isolated and solitary. I work with people to make films, but I don’t have a newsroom sitting behind me to talk about these things. I was kind of out there, engaging with the source and not knowing …  I had a pretty solid gut instinct that he was legitimate, but I didn’t know. It could have been entrapment, it could have been a big setup. So I felt more tense and afraid than I ever felt working in Baghdad or Yemen.

What about when you started talking to Snowden in Hong Kong?
Going to Hong Kong was really tense, but what made it easier was I was now working with other people — Glen was there, [Guardian reporter] Ewan [MacCaskill] was there. And then at some point it was clear that the reporting would happen. When you’re taking lots of risks and you actually start to achieve things, it makes the risks seem more worth it.

But once the newspaper stories about the NSA started coming out, which happened while you were still talking to Snowden in Hong Kong, you must have felt lots of eyes trying to figure out where the leaks were coming from.
In Hong Kong I was really worried that someone would bust down the door. I was backing up footage on encrypted drives, I was making sure to have something off-site so if anyone raided the hotel they wouldn’t get everything. I was making sure to destroy all the unencrypted recording media, so if anything was ever seized, all they would get was encrypted material. So I was preparing for worst-case scenarios. It would have been foolish not to.

But personally, I felt a lessening of attention. I knew the government wasn’t happy and they’d like to shut the reporting down, and they probably looked at options. There were risks of subpoenas or worse, and those things are not to be taken lightly. But it felt like it reached a point where what they did couldn’t stop the reporting. Whereas earlier on, they could have stopped the reporting from ever happening.