The story of how Elvis Presley dropped in on President Richard Nixon in 1970 has been kicking around for decades. I first heard it about 30 years ago from Jerry Schilling (pictured above left), who worked for Elvis for many years and accompanied him on the strange trip to the White House, where Elvis wanted to add a Drug Enforcement Administration badge to his collection of law enforcement badges and Nixon was persuaded that it might help with the youth vote, or at least with his daughter Julie.

Now that visit has been turned into the movie “Elvis & Nixon,” which opens on Friday after its Tribeca Film Festival premiere. The film, a comedy with Kevin Spacey as Nixon and Michael Shannon as Elvis, has received mixed reviews — TheWrap’s Sam Fragoso didn’t like it, though most other critics were more forgiving — but it puts an amusing spin on an unusual summit meeting.

And since Schilling served as a sometimes-reluctant executive producer on the Liza Johnson film, helping Shannon channel Elvis and coaching Alex Pettyfer, who plays Schilling in the film, I figured it was time to sit down at Tribeca with the guy who’d first told me the story decades ago.

TheWrap: When you first told me the story about going to the White House with Elvis, one of my favorite parts was when Elvis asked Nixon for White House souvenirs for you and [Elvis aide] Sonny West — and when the president handed them over, he said, “Well. Mr. President, they have wives and girlfriends too.”
Jerry Schilling: Yes. [laughs] And not only did Nixon go to his desk to get them, Elvis went with him, and was rummaging through Nixon’s desk to get the stuff. And [White House aide] Bud Krogh told me later, “You know, Elvis knew right where the real gold ones were.”

Why wasn’t that in the movie?
You know, I wondered about that after the fact. It was just the constraints of the film. There were so many things they had to leave out.

Of the people close to Elvis, you’ve always been one of the most protective of him. Was it hard to persuade you to get involved with this?
I was reluctant to get into this project for a couple of years, because comedies are not my forte. And with Elvis’ iconic image that some people like to make fun of, I was always protective.

The first script, I just said, “Thanks but no thanks.” Not that the script was bad, but it was not a portrayal of Elvis that I wanted to be involved with. I had always tried to portray Elvis as he really was — a pretty intelligent, leading-edge guy.

How did they change it for you?
We had some meetings with script doctors, they put some more sensitive scenes in, a couple with my character and Elvis’ character. And after all of this, I’m proud to be involved with this film. I think it’s fun. I don’t know if this is the right term, but it’s a docu-comedy, if you will. This is not something you’re gonna see on the History Channel. But if you want to see a fun film about an unusual meeting, I think you’ll really enjoy it. 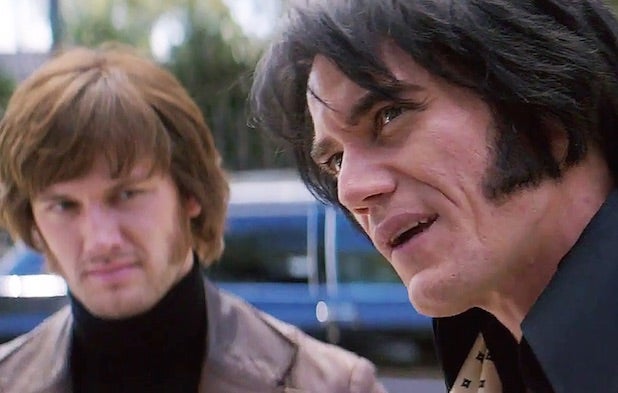 Do you think it accurately captures the dynamic between the two men?
Uhhh … It’s over the top, for the nature of the comedy of this film, but yeah, I do. There was a respect there. It didn’t make any difference to Elvis if it had been Nixon or Kennedy, it was respect for the President of the United States. And Nixon, I think to his surprise, got who Elvis was.

And there was nobody on this production that didn’t respect and really care for Elvis. They weren’t out to make fools of President Nixon or Elvis, and I think it shows in the film. And there are funny things that can happen if you have that respect, and if it’s in character.

One of those funny things happens when Nixon proudly shows off the moon rock that he says Buzz Aldrin sent him, and Elvis says, “Oh yeah, Buzz sent me one too.” Did Elvis really have a moon rock?
No. [laughs] Would he tell Nixon that he did? Maybe.

How did you work with Michael Shannon, who doesn’t really look like Elvis, on his performance?
We did a trip to Memphis, just Michael and I. We went to my neighborhood, and Elvis’ neighborhood in North Memphis where he grew up. The high school we went to, the housing project, Lauderdale Courts. I knew something special happened there. Mike was in the little bedroom, and I think that’s where he kind of identified with who Elvis was, and his lack of options at that time. I took him on a private tour of Graceland after that, but I think he got it at the housing project.

And I also shared a 42-minute audio interview I did with Elvis, where he talked about his career and how Hollywood never got who he was. Between every take Michael was listening to Elvis talk. There’s a little laugh he does in the movie, and he got it right off that tape. The audience is not going to know, but that’s how seriously Mike took this comedy.

Against all odds, he played the best inner Elvis I’ve ever seen.