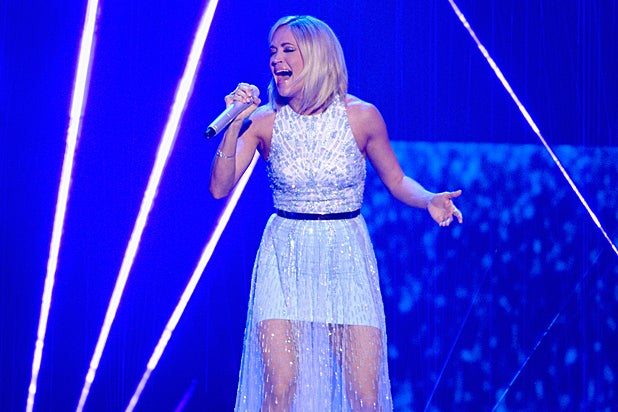 A version of this story first appeared in the print edition of TheWrap Magazine’s The Race Begins Emmy Issue.

“If people knew how unplanned and spontaneous this show was, they wouldn’t believe it,” said “American Idol” stage manager Debbie Williams. “But it was so much fun.”

Williams should know: For the entire 15-year run of the show that changed reality television, and also changed the way music stars were made, she worked side by side with host Ryan Seacrest — and for the first 12 of those years and then the final few weeks of this year’s final season, she also worked closely with the “kids” who competed on the show. Williams got some attention in Season 8 when a malfunctioning staircase ripped her leg open, requiring more than 60 stitches, but usually she stayed behind the scenes.

A couple of weeks after the show’s April 7 finale, Williams talked to TheWrap Emmy Magazine about her 15 years on “Idol.”

“Carrie had never been on an airplane before when she came to ‘Idol’ for the first time. She was a deer in the headlights, but she could sing. All the other stuff, she did not know. God forbid, she didn’t know how to move. It made [director] Bruce Gowers crazy. He’d say, ‘Can’t we get her to walk a little bit?’ That was not in Carrie’s toolbox yet. Carrie was so shy I thought, ‘How could this kid ever be a performer?’ Guess what? She figured it out.”

On Trent Harmon winning the final season over La’Porsha Renae:

“A lot of people were surprised that La’Porsha didn’t win. But I was talking to [longtime executive producer] Nigel Lythgoe the night before the finale and he said, ‘I don’t know. Those girl votes may go to Trent from Dalton [Rapattoni, the third-place finisher].’ He was right. That happens. Girls are the ones voting.”

On the last-ever episode of “American Idol”:

“At the top of the show, I was standing with Ryan [Seacrest] backstage watching the monitor and getting teary-eyed. Ryan went, ‘Don’t. Stop.’ The light came on and I cued Ryan to go out at the beginning of the show for the last time, and then I was like, ‘OK, I gotta do the show. Can’t stop.’ And then I was just in my zone.”

On producer Nigel Lythgoe, who oversaw the first 12 seasons of “Idol” and returned for the finale:

“It was nice that Nigel came back and did the finale. He and Ken Warwick got blamed for the 2012 season, and I don’t think it was all their fault. It was a weird year. The banter between [judges] Mariah Carey and Nicki Minaj was not manufactured, it was real. I remember the night that somebody did a Mariah song, and Nicki was the first or second one to speak. And she goes, ‘Gosh, I remember when I was a little girl just sitting in my bedroom listening to that song.’ And on the crew, we all just kinda went, ‘Ouch.’ There was stuff like that all the time. It wasn’t the happiest set, our audience just didn’t like it and Nigel and Ken got blamed.”

On the opening number, “One Voice,” which united Idols from across the run of the series — except, almost, for a few holdouts:

“There were a few kids that didn’t want to walk out in the white outfits and do ‘One Voice.’ No names, but I can think of three. They were kind of lackadaisical in rehearsal one night, so Nigel got up and gave one of his perfect Nigel speeches. He said, ‘I hand-picked all of you to be here, because you represent this show that has made history in the annals of television. When you walk out like you don’t care, I can’t stomach that. You’re here because I wanted you to be here, and you need to be proud and stand tall, because most of your careers would not have happened if it hadn’t been for this show.’ The stand-ins and everybody were all listening going, ‘Yes!'”