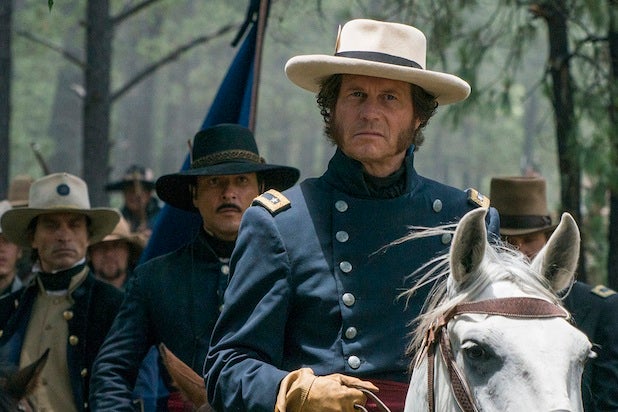 If it weren’t for a miniseries Bill Paxton starred in for History in 2012, the channel probably wouldn’t have made the miniseries he starred in in 2015.

The earlier series, “Hatfields & McCoys,” was such a sensation that it boosted the channel’s interest in original scripted programming, setting History records for ratings and Emmy nominations. (It scored 16.) In doing so, it led directly to this year’s “Texas Rising,” a 10-hour chronicle of the Texas Revolution starring Paxton as Sam Houston.

“It literally legitimized the network overnight,” said Paxton of that earlier miniseries, in which he co-starred with Kevin Costner. “I felt it was going to do pretty well, but it became a phenomenon. And it was at a time when HBO was starting to back off long-form programming, which left an opportunity for smaller networks to get into that business.”

So when History came calling with “Texas Rising,” with Hatfields producer Leslie Greif in charge and a subject matter dear to the heart of the Fort Worth native, Paxton was ready. A bonus was that he’d be playing a Texas icon with whom Paxton shared common grandparents six generations back–which, he said, “makes us second cousins four times removed.”

The relation to Houston made the veteran actor of films like “Apollo 13” and “True Lies” and the HBO series “Big Love” even more invested to the role. “There were a lot of scenes I felt could be stronger or more specific or clearer, so I fought for the integrity of the character the whole way through,” he said.

The key to Houston: “This man was a great student of human nature, but he also had an incredibly deep code of honor, integrity and ethics. That was the feeling I tried to get across.”

Of course, filming “Texas Rising” in Durango, Mexico wasn’t just a matter of trying to accurately present a distant relative — it was also a chance to climb back in the saddle in a genre the actor has long loved. “In our generation, we were steeped in Westerns,” he said. “Not only did we have the classic Westerns like ‘Shane’ and ‘The Sons of Katie Elder,’ but we also grew up in the days of revisionist Westerns like ‘The Wild Bunch’ and ‘Little Big Man.’

“So when I came out to Hollywood, one of my biggest dreams was to be in Western movies. And when I got involved with ‘Texas Rising,’ I had actors coming out of the woodwork to see if I could put in a good word for them.”

Paxton’s next move will be back to the big screen with Vince Vaughn in “Term Life.” “When I came out of ‘Big Love,’ which was the longest steady job I ever had, I don’t know if people quite knew what to do with me,” he said with a laugh. “And then I put on the beard and played Randall McCoy , and suddenly people realized I was a versatile actor again. And since then I’ve built a career being the guy supporting the guy.

“I supported Costner in ‘Hatfields,’ then Denzel Washington and Mark Wahlberg in ‘Two Guns,’ then Tom Cruise in ‘Edge of Tomorrow,’ then Jon Hamm in ‘Million Dollar Arm,’ then Jake Gyllenhaal in ‘Nightcrawler,’ now Vince Vaughn…

“I’m trying to get back in the director’s chair more than anything in the world, but to stay relevant as an actor, you keep working.”