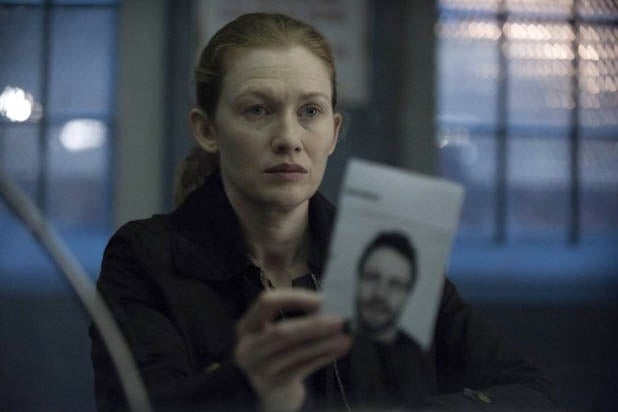 Claire Danes, Julianna Margulies, Robin Wright, Kerry Washington, Elisabeth Moss … Those are the usual suspects in the drama-actress category, where the vast majority of nominees in recent years have been making return trips to the Emmys.  But three of last year’s nominees (Vera Farmiga, Kerry Washington and Robin Wright) are from new shows, which means there’s hope for this crop of deserving women, some of them newcomers and others past nominees hoping to regain the Academy’s attention.

Mireille Enos, “The Killing”
Despite a Season 1 ending that upset a ton of people, “The Killing” is one of the most compelling drams on television, and the majority of its power resides in the acting performances of its two leads. Enos, who was nominated for the role in 2011, creates such a brooding character that it’s actually jarring when she breaks a smile. Unfortunately, the show has now been cancelled by AMC twice — and revived twice, most recently by Netflix for a fourth and final season — which means the show is always hanging on by a thread.  –Jason Hughes

Mariska Hargitay, “Law & Order: Special Victims Unit”
She landed eight consecutive nominations and one win between 2004 and 2011, but Hargitay hasn’t been nominated for her 15-season show since then. But at a time when most actors would have let the air seep out of their roles, she took on arguably the most challenging and grueling storyline of her career – one that required her to play the victim, assaulted and kidnapped. She reveled in the challenge, and found new depth in a role she’s been playing for longer than most shows are in re-runs. –Sharon Waxman

Lucy Liu, “Elementary”
Jonny Lee Miller’s performance as Sherlock Holmes in this unusual procedural only works with the right Watson to bounce off. Critics and fans were worried when it was announced that this Watson would be a woman, but Liu quickly put all those fears to rest with her masterful interplay with Holmes. Strong in her own right, she’s proven she can carry cases on her own. Unfortunately, though, the show falls into that mostly-ignored crime-procedural category, while the Academy generally seeks more complex fare.  –JH

Katey Sagal, “Sons of Anarchy”
Sagal’s work on “Married … With Children,” “8 Simple Rules for Dating My Teenage Daughter” and recently “Sons of Anarchy” has made her the queen of the Emmy snubees, landing her more than a dozen awards and nominations at the Golden Globes, American Comedy Awards, Prism Awards, TCA Awards, Satellite Awards and Critics’ Choice Television Awards — all without a single Emmy nomination. She’s way overdue — and if she draws a blank again this year, she’ll only have the upcoming final season of “Sons” to change her luck. –Steve Pond

Chloe Sevigny, “Those Who Kill”
Those who killed “Those Who Kill” included the critics, who liked star Chloe Sevigny but didn’t care for the show from “X-Files” alum Glen Morgan, and the viewers, who stayed away in such numbers that the 10-episode run was halted, then shifted from A&E to sister station Lifetime. The chief casualty may be Sevigny, and her odd performance that swung from dispassionate calm to sudden rage. It’s not easy to bring something genuinely different to the cop-show format, but she did.  –SP

Diane Kruger, “The Bridge”
Kruger doesn’t play the usual brusque cop. If she seems blunt and oblivious to social cues, it isn’t because she’s unfriendly: she has Asperger’s. Kruger and the FX drama made the risky decision to take a show-don’t-tell approach to that reveal, leaving many fans to wonder why her cop seemed so cold. But it also let her character earn our sympathy and understanding. – Tim Molloy

Vera Farmiga, “Bates Motel”
Vera Farmiga’s portrayal of Norma Bates in A&E’s “Psycho” prequel is certainly more lively than the one delivered in the original movie. (Granted, a not particularly difficult feat.) As the mother of a young killer in training with her own troubled past that she’s still grappling with, Farmiga brings depth and warmth to a part that could easily have fallen prey to stock horror-show schlockery. Freddie Highmore’s Norman Bates isn’t the only one who’s killing it on the show. – Tim Kenneally