The 74th Annual Emmy Awards ditched the traditional opening monologue in favor of an opening of a different sort: a performance dedicated to updated theme songs from television history that garnered plenty of strong reactions, from “WTF” to “random Snow White-esque opening dance.”

Beginning with the iconic “Friends” couch, host Kenan Thompson paid tribute to TV’s favorite theme songs, from “The Brady Bunch” to “Game of Thrones,” complete with Thompson wearing a platinum wig and throwing a comedic zinger onto the end of each performance by a troupe of dancers.

“This is like when your little cousin makes up a dance and performs it on the fireplace for an hour,” one user tweeted, while another wrote, “The Emmys are already a mess. I love it.” 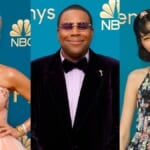 While this creative compilation was likely intended to spark appreciation for the history of the small screen, it seems it might’ve had the opposite effect for some. “This opening dance routine is making me hate TV history, was that the goal?” one viewer wrote.

Though the underlying reaction was “WTF,” some thought this was a stunt the SNL veteran could pull off.

“The thing about Kenan is, it doesn’t matter how nonsense the bit is, he’ll make it funny because he’s just a f–kin pro,” another user tweeted.

Others were more focused on Oprah, who followed up the introductory performance with some motivational remarks, or other celebrities at the awards.

“Not sure what the opening of the Emmys was… but Oprah looks great,” one person wrote while another said, “Michael Keaton was funnier in one sentence than the entire opening act.”

Check out more reactions to the Emmys’ opening performance below: