Starting at about the fifth entry in the series, the “Fast and the Furious” saga zoomed past dealing with car thieves and drag races and went right into international-superspy territory. “F9” shows the strategy still succeeding, even if it makes zero sense that a gaggle of car fanatics with shady pasts is all the planet has to protect it from massive global cyberterrorism.

Don’t bother asking why said car fanatics are the only people sent to investigate a plane crash in a foreign country; “F9” won’t be providing answers to that, much less to how and why some of the crew go into actual outer space by the final reel. These films demand that you just roll with the cockamamie plots, and in return, Justin Lin (the best of the “F&F” directors, back at the helm for the first time since #6) will craft a breathtaking melee of automotive destruction that plays like Wile E. Coyote and M.C. Escher competing in the Cannonball Run. (Lin and Daniel Casey share screenwriting credit.)

Just because the “Fast & Furious” movies are dumb, don’t assume that they’re easy to make; a host of soulless rip-offs — anyone remember “Need for Speed”? — demonstrate that these productions require a great deal of skill and a certain kind of light touch. Over the course of nine films, we’ve gotten to know a great many characters in this “family,” and “F9” constantly finds new and interesting ways to bring seemingly all of them out for their moment in the spotlight. 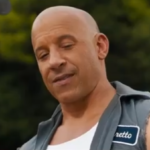 Also Read:
Han Returns From the Dead to Help Dom With His #Family Problems in First ‘F9’ Trailer (Video)

(By the time we get to “Fast 10: Your Seat Belts,” or whatever they’re going to call the next one, it’s going to take a solid hour of running time just to catch up with all the supporting players.)

If these movies are, in their blithe disregard for physics and gravity, superhero movies with cars instead of capes, they are also soap operas that have been soaked in enough testosterone and gasoline to allow straight men to enjoy plot twists like “never-before-mentioned estranged relative” and “dead person who isn’t” without feeling emasculated. The estranged relative here is Jakob Toretto (John Cena), the brother that Dom (Vin Diesel) has apparently had all along without ever talking about him. In a flashback, we learn that Dom blames Jakob for their father’s death in a fiery race crash, banishing his younger sibling from the family.

The brothers have a sister, of course: Mia (Jordana Brewster), who gets more to do than usual this time around, although the film seems particularly disinterested in her relationship with Jakob and how that played out in the overall Toretto family dynamic. This is a movie about men and brothers and men and fathers and men and cars, and sisters can just jump to the back of the line, apparently. 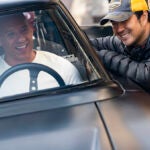 Jakob is tied up in a plot involving a dastardly doohickey that will override all of the planet’s computers, so it’s up to Dom and his team — Letty (Michelle Rodriguez), Tej (Chris “Ludacris” Bridges), Roman (Tyrese Gibson), Ramsey (Nathalie Emmanuel), and Sean (Lucas Black), to name just a few — to stop the bad guys, who are funded by Eurotrash dictator’s-son Otto (Thue Ersted Rasmussen) and benefiting from the technical know-how of the nefarious Cipher (Charlize Theron).

Lin skillfully bounces around the globe to tell this story, even devising a way to bring back fan-favorite Han (Sang Kung), the afore-mentioned dead-person-who-isn’t, in a way that makes sense, at least within what passes for logic in these movies. The effects and stunt teams all deserve gold stars for their work here, as do editors Greg D’Auria, Dylan Highsmith, and Kelly Matsumoto; even though the scale of the set pieces grows exponentially in “F9,” the craftspeople give the action enough grounding to register visually (and viscerally) rather than dissolve into a cacophony of ones and zeroes. The big chases and explosions are the kind that induce laughter and applause — half for how effective the scenes are, and half for how shamelessly over-the-top they are. 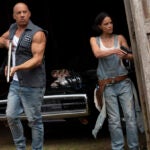 The performances are pretty much what we’ve come to expect over time: Ludacris and Gibson bring the prickly, goofy comedy, with Emmanuel’s brainy banter fitting in just perfectly; Rodriguez and Brewster register actual emotions; and Diesel does his national-monument thing. If there’s a piece that doesn’t fit, it’s Cena. When he gets to be funny, in films like “Trainwreck” and “Blockers,” he demonstrates real magnetism as a screen actor, but as the brooding, bitter baby brother, he’s a glowering wet blanket, and no fun whatsoever.

(“F9” continues to treat Brian, the character played by the late Paul Walker, as being still alive and just off-screen, which is an odd bit, but a bit the series is sticking to, apparently.)