The social media network reported a slight uptick in the number of daily users logging on to Facebook in a dramatic reversal from the 1 million lost during the first three months of the year. Meta said active users increased 4% to the 1.98 billion that helped prop up revenue, but not by enough to surpass Wall Street’s already dour expectations. Meta’s growth rate is now below levels seen since its initial public offering in 2012, and the company issued a gloomy forecast that weekend conditions will continue in the second quarter.

Wall Street sent the stock soaring in after-hours trading as sign of relief that the latest round of financial and user numbers weren’t far worse. Meta’s revenue rose 7% to $27.9 billion, with advertising by far the biggest driver. This pushed profit higher to $16 million, or $2.72 a share, which beat analyst expectations.

“We made progress this quarter across a number of key company priorities and we remain confident in the long-term opportunities and growth that our product roadmap will unlock,” CEO Mark Zuckerberg said in the release. “More people use our services today than ever before, and I’m proud of how our products are serving people around the world.”

Facebook, which once owned the social media space with no real rivals, has seen a steady drumbeat of users coming to the site infrequently while others cancel their accounts all together. The 3.64 billion people who check Facebook, Instagram, Messenger and WhatsApp on a monthly basis rose 6% from the year-ago period. Analysts expected an increase in monthly users hitting 3.7 billion for the period.

The slower pace of user growth for the past three years is mostly due to defections triggered by the rising popularity of TikTok, Snapchat and other social media apps. TikTok, the Chinese video sharing service, has replaced Snap to become the favorite social app among teenagers, according to a survey conducted by Piper Sandler this year. The platform became a favorite for the influencer set who made it their primary way to provide content to fans.

Zuckerberg told analysts in a conference call the surge in revenues during the pandemic were only temporary. As a result, he said Facebook must now “slow down the pace of some of our investments” in the near future to increase profits.

However, Meta is continuing to invest in its metaverse ambitions after rebranding itself last year to diversify its core social media business. In the first quarter, its Reality Labs, the augmented and virtual reality division, generated $695 million in revenue but lost $2.96 billion.

His plan is to draw people back to Facebook on a more regular basis using artificial intelligence to suggest posts from the most popular feeds from all of Facebook that factors in the tastes of individual users. So instead of putting up posts based mostly on what they see on their family or friends’ walls, this would function in a more global sense like TikTok’s “For You” feed.

“It was a mixed report overall as the social media giant continues to struggle with slowing revenue growth amid reduced ad spending amid the current inflationary environment,” said Jesse Cohen, senior analyst at Investing.com, adding that “the beat on Daily Active Users was enough to send the shorts covering and the stock surging.”

Facebook shares have fluctuated in recent years after it became a favorite of Wall Street’s option trades, who place bets that a stock will move in an opposite direction. If these investors make wrong-way wagers, it can cause gyrations in the stock price.

The biggest decline came in February, when the company shed more than $230 billion of its market value in just one week, making its valuation less than a quarter of Apple’s $2.8 trillion market cap. Meta went down in history that month for the biggest one-day crash in the stock market. 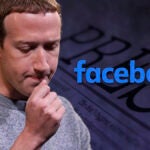