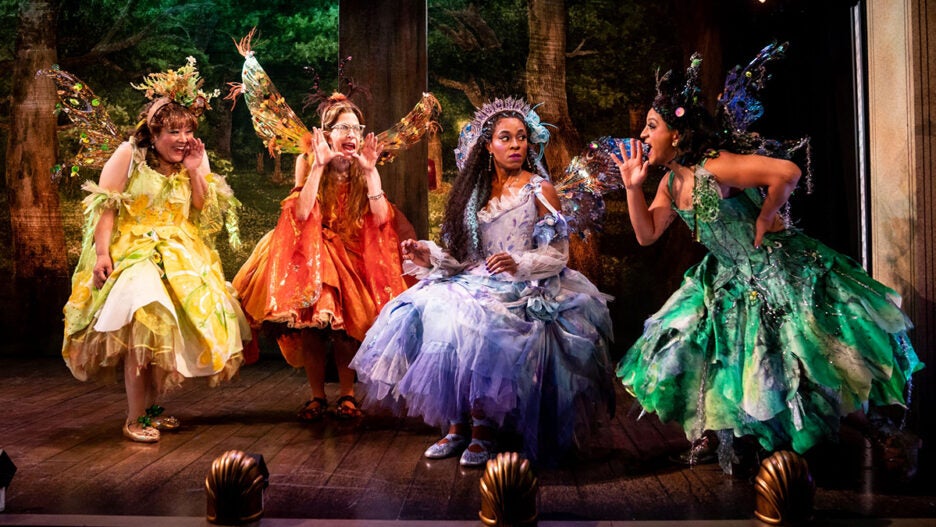 And the award for best and most fabulously whimsical costumes in a new comedy performing in a small downtown theater Off Broadway goes to Gregory Gale. The more than three dozen extravagant ensembles that Gale has designed for the 12 actors in Douglas Carter Beane’s “Fairycakes” are nothing short of stunning.

Perhaps lost in that last sentence is the fact that Beane has written and directed a play in which there are 12 — count ‘em, 12 — actors on the small stage of the Greenwich House Theater, where “Fairycakes” opened Sunday. Many Broadway musicals don’t boast a dozen performers, and that includes the people playing instruments in the orchestra pit. Better yet, three of the “Fairycakes” actors are inspired veterans of the post-Ridiculous Theater in the city — and once again, Julie Halston, Ann Harada and Jackie Hoffman don’t disappoint. It takes each of them a while to deliver the expected laughs, however, hampered as they are by a long first act that strings together way too many plot points borrowed from, among other classics, “Sleeping Beauty,” “The Little Mermaid,” “The Tales of Pinocchio,” “Cinderella” and “A Midsummer Night’s Dream.”

As if that weren’t twee enough, Beane has his characters speak in rhymed couplets. Nothing can sink comedy faster than forced whimsy, and with so many characters (double- and triple-casting abounds), this convoluted story of nymphs, puppets and humans trying to find love often loses its way in the midsummer night’s fog machine. 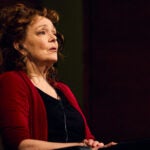 But “Fairycakes” is very much about miracles, and slightly more than halfway through the tedious first act, Cinderella’s stepmother (Jamen Nanthakumar) and two stepsisters (Sabatino Cruz and Mo Rocca) show up in Gale’s breathtaking chiaroscuro outfits to meld this evil trio to Puccini’s ditzy Ping, Pang and Pong,  which the New York Times recently informed us are racist depictions, at least in the current Metropolitan Opera production of “Turandot.”

The moment is inspired for a number of reasons: First, there are Gale’s stylishly ridiculous costumes. The scene is grounded in two very dissimilar but classic fairy tales. It’s propelled by the three actors’ utter lunacy. And I couldn’t understand a word of their falsetto gibberish. Utterly delightful. For about two minutes. Then it’s back to twee.

Fortunately, the other less intriguing tidbits of nursery plots disappear as soon as Halston reappears at the end of Act 1. No longer playing the Bard’s Titania, she is now Elizabeth I of England, complete with her eponymous collar. The queen apologizes for being a real person, but insists Elizabeth belongs here because Shakespeare mentions her, albeit obliquely, in his spirits-laden comedy. Elizabeth is not happy with the “political” references; and as played with assured comic fury by Halston, this actor grabs the show by its fairy wings to slap it into shape. It doesn’t hurt that Beane has given Halston a great speech. 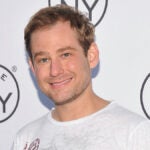 Disenchantment reigns in the far-more focused second act, and Beane successfully mismatches his many couples in ways Shakespeare never dreamed. After such a long set-up, the ensuing havoc is genuinely funny and surprisingly poignant at times.

Unfortunately, the other fairy servant, Peaseblossum – the Fairycakes of the title – is given the most stage time, and like a lot of ingenues (Juliet foremost among them) she isn’t given much to do but be sweet and pretty. Kristolyn Lloyd manages to be both those things as she’s pursued by a Puck (Chris Myers) who’s made up to be a satyr. Again, great costume from Gale.

As a director, Beane is great with his actors, horrible with their exits, especially upstage right. There are constant traffic jams, not to mention long pauses in the couplets as we wait for the crowd to dissipate.