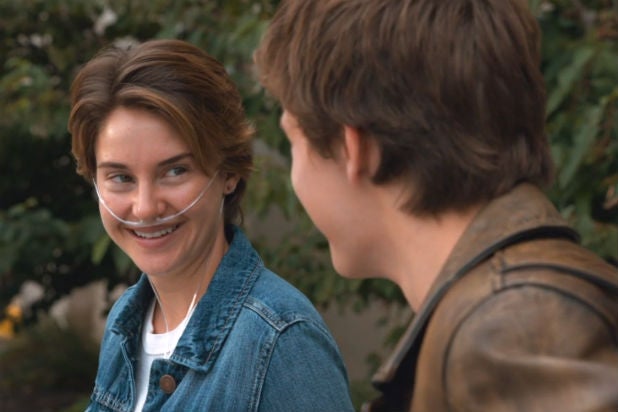 “The Fault in Our Stars,” the big-screen adaptation of the bestselling young-adult novel by John Green, is killing it on social media. Whether that will pay off at the box office remains to be seen.

We’ll find out June 6, when the heart-rending romantic comedy-drama starring Shailene Woodley and Ansel Elgort opens in the United States.

“The Faith in Our Stars,” the story of two teenage cancer patients who fall in love after meeting at a support group, has been been the most-tweeted, “liked” and buzzed-about movie online this summer.

Its Twitter mentions are outstripping those of Fox’s blockbuster-to-be “X-Men: Days of Future Past,” Sony’s “22 Jump Street” and Disney’s “Maleficent.” It’s extremely strong on Facebook as well with 2.5 million “likes,” and since the trailer was released on YouTube in January, it’s has been viewed more than 18 million times and “liked” more than 273,000 times — more than any film in history.

And that’s just the movie. Author Green, who in April made Time magazine’s list of the world’s 100 most influential people, has 2.34 million Twitter followers and more than 2 million subscribers to the “Vlogbrothers,” the YouTube series he co-hosts with his brother. Green was on set throughout the filming, offering frequent updates for fans.

“The Fault in Our Stars” is looking at an opening north of $30 million, based on tracking two weeks away from its opening, though Fox is projecting a debut between $20 million and $25 million. Either would be fine for the studio and Temple Hill Entertainment’s Wyck Godfrey and Marty Bowen, producers of the $12 million film. But the huge social media numbers suggest it could go higher.

“One of our goals when we made the movie with a relatively low budget, and knowing we were dealing with difficult subject matter, was that if we just got people who read the book to come see it, we’d be OK,” Godfrey told TheWrap.

The Temple Hill teams know the teen girls movie territory. Bowen was exec producer and Godfrey was a producer on the blockbuster “Twilight” movies. They also know how to handle a book-based movie, having produced “Dear John,” a romance starring Amanda Seyfried and Channing Tatum that was adapted from a Nicolas Sparks bestseller. That one opened to $30 million domestically in February of 2010, and went on to take in $115 million globally. And they clicked with “Safe Haven,” another low-budget romance based on a Sparks novel that opened to $21 million and topped out at $71 million.

“Our main strategy with ‘Fault’ has been to get it in front of core audience, people who have read and loved the book, hope they like it and then get the word out,” said Godfrey. Fox has facilitated that with a multi-city screening tour that has drawn turn-away crowds of mainly teen girls. “So far that’s worked out great,” he said.

Through-the-roof social media buzz can signal a hit, as it did with “The Purge,” a horror movie that broke out last June after its online buzz spiked significantly. Or it can produce something of a “false positive,” as it did with last summer’s “Pacific Rim.” Guillermo del Toro‘s giant robot epic was trending mightily in the days before its domestic debut, but disappointed.

It would be a mistake to read too much into the social media numbers at this point, said a top executive at a company which specializes in melding online and traditional tracking data in its marketing analysis.

“The social media activity is being driven by the primary audience, young women, many of whom have read the book,” he said. “I think at this point the social media buzz is more of an indicator of the intensity of interest among that core than a sign of broad appeal among the mainstream, so there’s room to grow the audience.”

The same is true of trailer views. The film that “Fault in Our Stars” beat out as the most-viewed YouTube trailer is “This Is Us,” the One Direction concert movie that debuted to less than $16 million last August.

Online buzz aside, “The Fault in Our Stars” looks well-positioned to score at the box office, said BoxOffice.com vice-president and senior analyst Phil Contrino.

“This looks like a prime bit of counter-programming for the summer, and you never want to underestimate a tearjerker, especially since there hasn’t been anything like this in the marketplace,” Contrino said. “The Fault in Our Stars” will open against the Tom Cruise sci-fi action film “Edge of Tomorrow,” a week after “Maleficent” and a week before “22 Jump Street” and “How to Train Your Dragon 2” debut.

Godfrey is sold on the date now, but wasn’t originally.

“Fox was brilliant about picking this spot,” he said, noting that he initially thought the less-crowded fall might be a safer play. “There’s nothing like this film that will play to females all summer, so hats off to them.”

Contrino believes the online activity could very well be indicating strength beyond that which traditional tracking suggests, but agreed that expanding the appeal beyond young women would be the key to its overall success.

“If it can bring in more mature audiences, the ‘Oprah’ crowd, it could really take off,” he said. The early strength with young women will allow the marketing team to focus on that sector as the release date nears, Godfrey said.

The huge social media profile could make a difference for “Fault” on its opening weekend, Contrino said.

“One of today’s realities is the speed with which word-of-mouth gets out. You saw that with ‘Neighbors’ a couple of weeks ago, where it had a pretty good Thursday night, a good Friday and then exploded on Saturday and Sunday.

“If ‘Fault’ delivers to its faithful on that first day, the good word is going to spread like wildfire,” he said.

Watch the video on love or life below: