(For TheWrap’s full coverage from the festival, read WaxWord — From Cannes and Report From Cannes.)

In this morning’s roundup of Cannes news ‘n’ notes from around the web, the festival gets posterized and Roger Ebert rhapsodizes.

Roger Ebert provides an elegiac salute to Cannes gone by, and a look forward encapsulated in a sad, graceful sentence: “But we are here at the end of something and not the beginning.” As he waits for this year’s festival to show him some great movies from directors he doesn’t know, he also casts his gaze to the domestic landscape, where the studios have lost interest in “what some of us consider good cinema,” but can’t wait to lure the masses with day-and-date releases of big mainstream movies made and marketed to appeal to the broadest possible audience. But Ebert, thankfully, isn’t going quietly. He’s back at Cannes, back at screenings every morning, back writing about serious artists and worshipping at what he calls the Temple of Cinema. “The world may be dying,” he says, “but not yet.” Bless him. (Roger Ebert’s Journal) 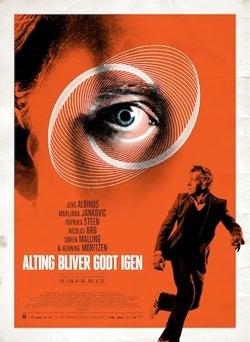 Here are some Cannes visual treats: Fin de Cinema has tracked down and assembled posters for about two dozen of the films screening at this year’s fest. Funny how some of these foreign art movies have posters that wouldn’t look out of place if they advertised a mainstream Hollywood release, though others are nicely imaginative. And the poster for Christoffer Boe’s “Alting Bliver Godt Igen” (“Everything Will Be Fine”), right, has a cool ‘50s Hitchcock vibe to it. (Fin de Cinema)

indieWIRE, which has a big team on the ground in Cannes, does a Day 1 “minute by minute” roundup, which isn’t quite as timely as the headline promises. But it includes notes on a few deals; coverage of press conferences from jury president Tim Burton (“we want to view every film with a generosity”) and “Robin Hood” star Russell Crowe (“we took a very arrogant perspective”); and the news that Bob Berney, who resigned from Apparition on the eve of the festival, will be in attendance after all, though in what capacity and for whom remain unclear. (Speculation centers on Newmarket, where he used to work.) (indieWIRE)

Kenneth Turan works the middle ground for all its worth: this year’s lineup, he reports, is “neither weak nor particularly strong.” His scene-setting report says the weather (volcanic ash, big waves) may well be more exciting than the movies, though I love the part where he wades into the Marche du Film market and discovers a classic tagline for the low-budget horror flick “Spider in 3D”: “8 Legs, 3 Dimensions, 1 Disaster.” (Los Angeles Times) 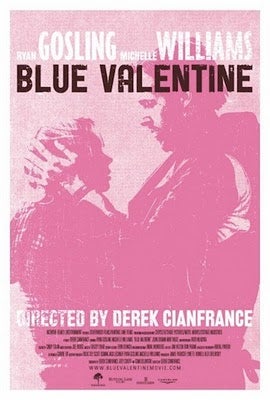 Elisabetta Povoledo covers the Cannes controversy du jour, the snubbing of the festival opening by Italian culture minister Sandro Bondi. It seems that Bondi is upset because the festival programmed “Draquila: Italy Trembles,” a documentary that charges the Berlusconi government with capitalizing on reconstruction efforts following a 2009 earthquake in L’Aquila. The problem for Bondi is that his absence, and his criticism of the film, is being interpreted as yet another piece of evidence that the government is intolerant toward dissent. (The New York Times)

For all of us who were waiting anxiously to see how Russell Crowe reacted when Jeff Wells asked him if “Robin Hood” doesn’t cater to the conservative tea-party crowd, bad news: Wells says he didn’t get called on at the press conference, so his query went unasked. But Wells took some video, and gives his mark of approval to Crowe: “funny, brilliant, perceptive and no fool.” (Hollywood Elsewhere)  Anne Thompson, on the other hand, went to the same press conference and thought Crowe came across as arrogant and "unattractive."  (Thompson on Hollywood)

Joe Utichi lists Cinematical’s “10 Hot Picks” from Cannes. It’s not all that different from the Daily Beast’s recent “14 hottest films,” which is to say that it’s seriously tilted toward English-language features and mainstream movies, which really isn’t what Cannes is about. It’s Mike Leigh and Stephen Frears, Ridley Scott and Oliver Stone and Woody Allen, Doug Liman and Gregg Araki – and then, because you can’t cover Cannes without nodding to the non-English-speaking world, he throws in France’s ultimate auteur, Jean-Luc Godard, Mexico’s Alejandro Gonzalez Inarritu, and Japan’s Hideo Nakata, who might not count, because his new movie “Chatroom” does happen to be in English. (Cinematical)

Sasha Stone goes to Cannes for the first time and runs into the press-pass hierarchy: pink and white press badges can get you varying levels of access, but yellow ones don’t get you much of anything. She has a yellow badge. That’s kind of how it goes at Cannes: journalists with good passes happily write about the movies, and ones without them understandably write about the passes. (Awards Daily)

(For TheWrap’s full coverage from the festival, read WaxWord — From Cannes and Report From Cannes.)