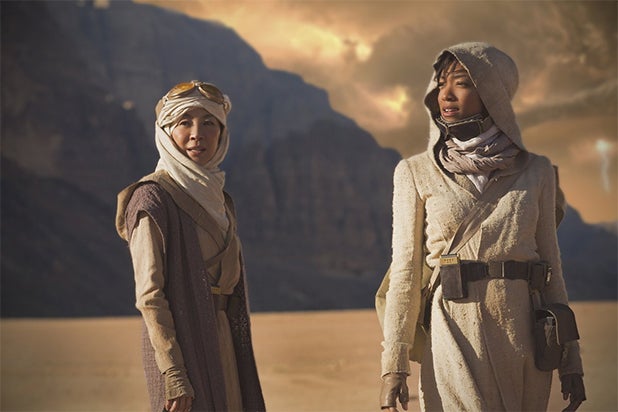 The photo — tweeted from the network’s official account — shows Sonequa Martin-Green, the series lead, who is playing First Officer Michael Burnham, and Michelle Yeoh, who is playing Captain Philippa Georgiou.

Casting Martin-Green, known for her role on AMC’s “The Walking Dead,” signaled a departure from previous “Star Trek” series, which have all had a Starfleet captain as the lead. In “Discovery,” Burnham is a lieutenant, while the captain of the Discovery is Captain Lorca, played by Jason Isaacs. It’s also the first time a woman, specifically a woman of color, has led a “Star Trek” TV series.

The show has hit a few snags since production began. Original showrunner, Bryan Fuller, left the post in October, although he’s still serving as an executive producer and has some creative control. While it was originally supposed to premiere in the beginning of 2017 on CBS All Access, the network’s budding streaming service, now its premiere date is unclear. Last everyone heard, the show will premiere in late summer/early fall.

However, with upfronts this afternoon, which will see CBS officially announcing its schedule and some of its newest additions, industry watchers expect a trailer or more news to be revealed.