Florence Pugh is further limiting her promotional press for her upcoming film “Don’t Worry Darling,” as the actress will not be in attendance at the press conference for the movie at the Venice Film Festival, where it’s having its world premiere, TheWrap has learned

Pugh will still appear on the red carpet for the film’s premiere and will be in attendance at the screening. She will be flying in from the set of “Dune: Part Two,” and her plane does not arrive until after the press conference has concluded.

Director Olivia Wilde and co-star Harry Styles both arrived in Venice on Sunday and will be present for the press conference.

TheWrap exclusively broke the news a couple of weeks ago that Pugh, who is the star of the psychological thriller, would have a severely limited promotional presence for the film. The red carpet and press conference at the Venice Film Festival were expected to be the extent of her traditional press duties, and now the press conference is out. “She’ll be doing greetings for us from the set of ‘Dune’ because she’s not doing press,” a studio executive told TheWrap at the time. 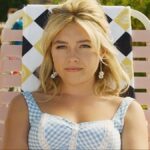 According to the exec, the studio knew that Pugh’s availability for the press tour on “Don’t Worry Darling” would be limited, considering “Dune 2” is also a Warner Bros. project, and planned for such.

Still, Pugh’s extremely limited presence on the promotional circuit for a film in which she’s the star – and which is poised to be one of the major releases of the fall — suggests there might be validity to speculation on a fallout between Pugh and the film’s director Olivia Wilde.

It’s also worth noting that Timothee Chalamet, the star of “Dune: Part Two,” was able to make the press conference, red carpet and premiere of his new film “Bones and All” at Venice on Friday.

Perceived tension between Pugh and Wilde isn’t the only drama surrounding the film. Last week, Shia LaBeouf pushed back on the assertion that he was fired from the film due to behavior issues, sharing a video of Wilde trying to convince LaBeouf to remain involved in the project. His role was eventually recast with Styles.

“Don’t Worry Darling” is Wilde’s second directorial feature after her hit 2019 comedy “Booksmart” and finds Pugh filling the role of a ’50s-style housewife in an artificially perfect society in the desert, where her husband (Styles) and the other men go off every morning to work in a mysterious mountain where supernatural forces make it a forbidden place for the women. In time, Alice comes to suspect that a nefarious force is keeping her and the other women prisoners of this idyllic society.

“Don’t Worry Darling” premieres at the Venice Film Festival on Sept. 5 and opens in theaters on Sept. 23. 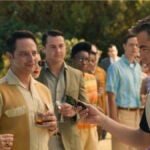