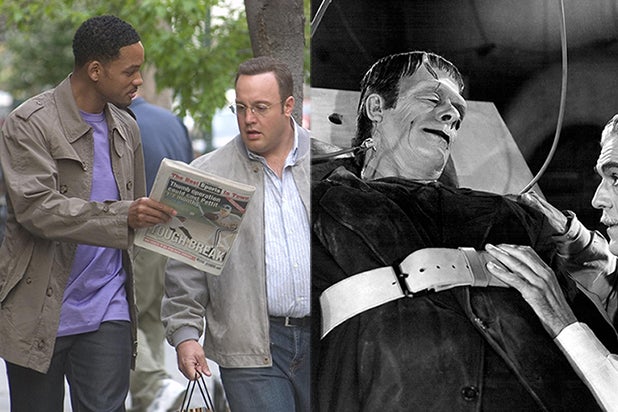 The network has a script commitment for a single-camera “Hitch” remake, which will be executive produced by the 2005 rom-com’s star Will Smith, and a put pilot commitment for “Frankenstein,” a sci-fi cop drama about a reincarnated FBI agent based on concepts from Mary Shelley ‘s classic novel.

Deborah Kaplan (“Leap Year”) and Harry Elftont (“Made of Honor”) will executive produce and co-write “Hitch,” a single-camera remake of Smith and Eva Longoria‘s big-screen comedy. Fox has billed the half-hour remake as a workplace comedy centered around sexual politics and dating. Smith, ,  (““) and Caleeb Pinkett (“Lakeview Terrace”) are also listed as executive producers.

The pilot for “Frankenstein” will be written by Rand Ravich (“Crisis”) and co-executive produced by Ravich and Howard Gordon (“Homeland”). The show focuses on a morally corrupt FBI agent who gets a second chance at life after he’s brought back from the dead.

The Frankenstein’s monster-esque character — Adam Tremble — is forced to choose between his old trappings and his new sense of purpose. Making things more complicated are threats he has to deal with, which are beyond the FBI’s capabilities, and his complicated relationships with the antisocial Internet billionaire and his bio-engineer twin sister who “created” him together.

“Frankenstein” and “Hitch” are the most recent remakes headed for television this development season, but as TheWrap previously reported, there have been others.

CBS is developing a remake of  “Rush Hour,” Fox is adapting Tom Hank’s “Big,” NBC is working on “Marley & Me,” Showtime is remaking the 1967 classic “In the Heat of the Night” and the CW is rebooting “The Illusionist.”