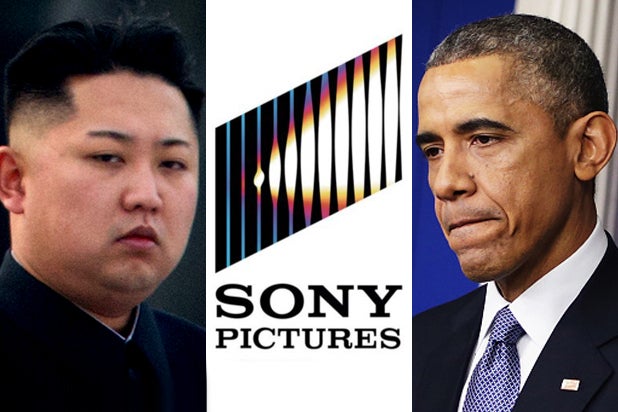 On the heels of a devastating blow to American pride and Hollywood’s status, momentum is growing to release the cancelled movie “The Interview” somehow.

An interesting thing has happened since the White House pronounced late last week that Sony had made a mistake in cancelling the controversial Seth Rogen-James Franco comedy, and Sony pronouncing that it had no choice but to cancel. Voices from across the political spectrum, from Hollywood and beyond – and now including the studio itself – have been calling for a method to release the movie.

Pundits and celebrities have led a steady drumbeat on social media calling for the release of the movie practically since its cancellation on Thursday, with everyone from Judd Apatow to George R. R. Martin militating for a way to get the movie out in defiance of North Korean threats. (Martin offered to screen it at the theater he owns in New Mexico.)

Across the political landscape, voices on the right and left are clamoring for a response more in keeping with America’s embrace of free expression.

Among the right-leaning politicians calling for the film’s release are Newt Gingrich, Jon Huntsman and John McCain.

Then on Saturday, the leader of the Republican Party issued a call to release the film and promised the support of the party faithful: “I will send a note to the Republican Party’s millions of donors and supporters urging them to buy a ticket — not to support one movie or Hollywood, but to show North Korea we cannot be bullied into giving up our freedom,” Reince Priebus vowed in an open letter.

President Obama said in an interview with CNN on Sunday that had he been asked, he’d have called theaters and asked them to show the film – leaving open the possibility that he might still do so if asked.

In his Monday morning column, David Carr wrote in The New York Times that the president should get all relevant parties together – Sony, Netflix, Hulu, iTunes, cable stations, broadcast – and get them all to play the movie. “Ubiquity and the lack of a discernible target would trump censorship,” he wrote. “Play the movie.”

And in Hollywood, the Directors Guild of America issued a statement saying the guild “hopes a way can be found to distribute the film.”

Also Read: North Korea Says US Behind ‘The Interview,’ Threatens to ‘Blow Up’ White House

It appears that Sony is increasingly moving in this direction. Even as the studio deleted the social profiles for “The Interview,” Sony Pictures CEO Michael Lynton insisted that the studio would like to release the film – “We would still like the public to see this movie. Absolutely,” he said on CNN . And on Sunday Sony lawyer David Boies told Meet the Press that the movie will get out there: “Sony only delayed this,” Boies said.“ It will be distributed. How it’s going to be distributed, I don’t think anybody knows quite yet.”

It all amounted to the growing sense that everyone would like to somehow undo last week’s decision. And while apparently no video on demand service has stepped up to distribute the film – and many are openly wondering why Sony-owned Crackle couldn’t be the first to do so – the rising tide of opinion in favor of release may shift that reality.

It’s no longer a matter of financial risk, or cyber-security. It’s now become a matter of national pride.

Is it still possible to snatch victory from the jaws of defeat? Is it possible learn from the mistakes that have been made and defuse the threats of a callow dictator? It’s looking increasingly possible that yes, we can.