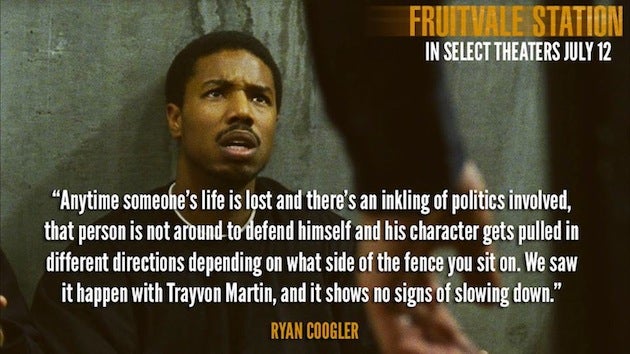 The Trayvon Martin and Oscar Grant cases are separated by three years and 2,500 miles, but the two shooting death of young African-American men are becoming inextricably linked with the release of a film about one just as the trial resulting from the other nears its conclusion.

In Sanford, Fla., testimony continues this week in trial of George Zimmerman, the neighborhood watch coordinator who shot and killed 17-year-old Martin in February 2012 after seeing him in a gated community and telling police that "he's up to no good." And on Friday, the Weinstein Co. will release "Fruitvale Station" (left), first-time director Ryan Coogler's drama looking at the last day in the life of 22-year-old Grant, who was fatally shot by a guard after an altercation on a BART train in Oakland, Calif., on New Year's Day, 2009.

The Oscar Grant Foundation, which was established in the aftermath of Grant's death, has sent a representative to the Zimmerman trial and spoken out about the trial in public and on its Facebook page.

Also read: 'Fruitvale Station' Star Michael B. Jordan on Playing a Black Superhero: 'I'm Up For It'

The promotional images used on the film's Facebook page and its website include one (above) in which Coogler makes the connection explicit: "Anytime someone's life is lost and there's an inkling of politics involved, that person is not around to defend himself and his character gets pulled in different directions depending on what side of the fence you sit on. We saw it happen with Trayvon Martin, and it shows no sign of slowing down."

And television ads for "Fruitvale Station" have even aired this week during coverage of the Zimmerman trial — an ad buy not specifically targeted at trial coverage, but part of what a TWC spokesperson told TheWrap was "a media campaign targeting arthouse and crossover audiences for this first break, including cable news."

Also read: Jon Stewart on Alleged Trayvon Martin Slur: 'That Doesn't Sound Like a Word At All!' Both cases involve a young African-American man shot by someone in a position of authority — a member of the transit police in Grant's case, a neighborhood watch coordinator with ambitions to join the police force in Martin's.

(Photos: Martin at right, Grant below.)

In both cases, controversy swirled around whether the shooter was justified in believing the unarmed young man constituted a threat, and in both cases attention was focused on the background of the victim. The transit officer who shot Grant was convicted of involuntary manslaughter rather than second-degree murder, setting off riots in the Bay Area; the Zimmerman verdict, which could be in the hands of the jury by the end of this week, has the potential to inflame communities as well.

Coogler himself has made the connection in interviews he's done in conjunction with his film, which won both audience and jury awards at the Sundance Film Festival.

"Trayvon should still be here," he told BlackTree TV. "Oscar should still be here. Thousands of African-American and Latino men are losing their lives on the streets, be it from black-on-black crime, brown-on-black crime, brown-on-brown crime … or officer involved shootings … where they get shot by people who are supposed to be protecting them … It shouldn't be that way."

Martin had not been killed when Coogler wrote the script for "Fruitvale Station," but his death grabbed national headlines just before "Fruitvale" went into production in Oakland with a cast that included Michael B. Jordan, Octavia Spencer and Melonie Diaz.

"It happened right before I read the script, which made me stop and go, 'Wow, this is so relevant,'" Jordan told CNBC.

Added Diaz, "We thought, 'My God, this is so topical. We have even more of a reason to make this movie because it happens too often.'"

The film was shot in Oakland with a low budget and a fast schedule, and readied in time for January's Sundance as Zimmerman was charged.

Originally simply titled "Fruitvale" after the BART station where Grant was shot, the movie depicts the final day of Grant's life with a few flashbacks. It does not use the real name of BART police officer Johannes Mehserle, who claimed that he'd mistaken his gun for his Taser, or the names of his fellow transit officers.

Its release date echoes last year's Sundance winner "Beasts of the Southern Wild," which landed an Oscar Best Picture nomination. The date was set after the Weinstein Co. acquired the film at Sundance, and long before trial dates were set for Zimmerman.

The company's campaign has focused on the film's rave reviews and its prizes from Sundance and Cannes, and has not specifically mentioned the Trayvon Martin case.

Still, the film's release is likely to coincide with final arguments, bringing two young men from different sides of the country into an uneasy, violent alliance.