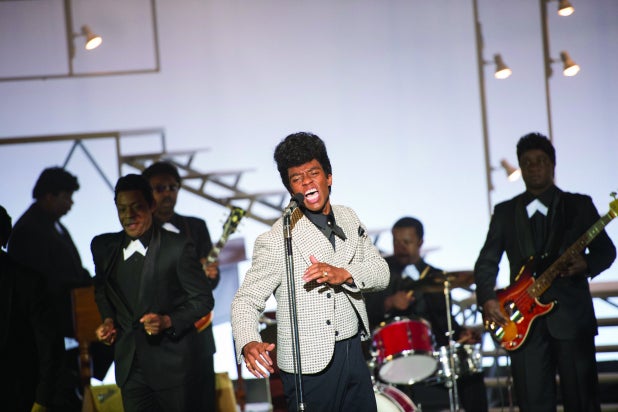 Time will tell which of these two films winds up being the fluke, but director Tate Taylor, the man behind the cloying and artificial “The Help,” has bounced back with “Get On Up,” a daring and often thrilling screen treatment of the life of music legend James Brown.

(Yes, I know, “The Help” made money and won Oscars. Don’t pretend that an awful movie has never done that before.)

If you thought the recent “Jersey Boys” was stodgy and problematic, here’s a music movie that avoids that other film’s pitfalls: It places Brown (Chadwick Boseman, in an electrifying performance) into a specific cultural and political context, while also spelling out to a mass audience the musician’s innovations as a performer, artist, and businessman.

At the same time, “Get On Up” never skids into puff-piece territory; the film shows us that Brown could be a devoted friend but also an insufferable egotist; a loving husband who could, in turn, be abusive to his wives; and a shrewd money manager who also found himself in debt after a series of misguided entrepreneurial decisions.

It’s a film that keeps you on your toes by refusing to follow the predestined path of so many rags-to-riches-to-rags-to-ultimate-vindication stories of the genre. Admittedly, “Get On Up” doesn’t start with much promise: the trite-and-true first moments show an older Brown walking toward the stage as snippets of the dialogue we’ll be hearing for the next two-plus hours reverberate through his head.

Just then, however, the screenplay by Jez Butterworth and John-Henry Butterworth (“Edge of Tomorrow”) cuts to a PCP-addled Brown holding an insurance seminar at gunpoint because one of its attendees used his private bathroom. After that we’re back in the 1930s, where young James (twins Jordan and Jamarion Scott, wonderfully wide-eyed and empathetic) staves off hunger in his parents’ sharecropper shack. And then the 1960s, where Brown’s USO plane barely survives enemy fire over the jungles of Vietnam.

Once it’s clear that chronology has been thrown out the window, “Get On Up” gets a lot more exciting. Even if you don’t know the specific details of Brown’s life, you’ve probably seen enough film biographies of famous musicians to understand the basic trajectory. It doesn’t matter, however, if we know all the beats in advance, as long as we don’t know which one’s going to hit us next.

That’s a challenging way to tell this story, but Taylor and the Butterworths keep things lively for nearly the entire run time, even allowing for some of the more hallucinatory moments you’ll probably see in a studio movie this year.

(My favorite involves Brown lip-synching “I Got You (I Feel Good)” on the set of 1965’s “Ski Party,” only to have the background slow down as the singer realizes he’s toning himself down for a white audience; the film then cuts to Brown’s triumphant 1971 Paris concert, where he performs a faster, funkier version.)

Unlike “Jersey Boys,” which never bothered to mention The Beach Boys or The Beatles, this film continually locates James Brown in a particular time and place, whether he’s showing up the Rolling Stones on “The T.A.M.I. Show” (Brown superfan Mick Jagger is a producer of “Get on Up”), hosting a concert in Boston (and quelling a potential riot) on the night after the MLK assassination, or balancing the politics of the Black Panthers on one side and LBJ’s White House on the other.

(As a point of comparison: “The Help” was a movie that implied that racism was a matter of personal choice, rather than something ingrained and institutionalized in American life; “Get on Up” is a movie where a child gets his first pair of dress shoes by removing them from the feet of a lynched man.)

That time and place is, of course, catnip for the art, hair, and makeup departments, and they capture the passing decades between the 1930s and the 1990s with both exuberance and accuracy.

Also read: ‘The Help’s’ Viola Davis to Star in Shonda Rhimes Pilot ‘How to Get Away With Murder’

“Get on Up” boasts a universally excellent ensemble, and its secret weapon is Nelsan Ellis (“True Blood”) as Brown’s right-hand man Bobby Byrd; it’s no easy thing to give a supporting performance opposite a star, playing someone who spent his life giving a supporting performance opposite a star, but Ellis rides that line skillfully, making the character fascinating while portraying his desire (or willingness, in any event) to remain in the shadows.

Despite their prominent billing, Taylor’s “Help” stars Viola Davis and Octavia Spencer have screen time that’s about a notch above cameo, but they each get one big scene that pays off in depicting the women in young James’ life. (Brown’s mother could have been a one-dimensional loser in a lesser movie, but Davis, bolstered by the script and direction, gives her dignity and relatability.) Dan Aykroyd pops up as Ben Bart, an early manager and champion of Brown’s, and he’s fine, but in the moments where he starts talking fast and stammering, Aykroyd calls to mind his old Irwin Mainway character from “SNL.”

Former Disney Channel star Brandon Smith’s wonderfully saucy turn as Little Richard comes and goes all too quickly; he deserves a biopic of his own. (Suggested title: “Oh, Rooty!”)

“Get on Up” belongs, as it must, to Boseman, who delivers the kind of charisma, showmanship, sex appeal, and tireless energy that allows us to believe him as the Hardest Working Man in Show Business. Where Boseman’s Jackie Robinson in “42” was forced to tamp down his rage, Boseman’s Brown is black and he’s proud. And while the vocals are Brown’s, the dance moves are Boseman’s, brilliantly mirroring the original.

James Brown made his mark defying notions about beat and rhythm, and “Get on Up” embraces that idea in its storytelling and editing (by Michael McCusker). In the stodgy world of biopics, it’s a sex machine.