The cut runs 114 minutes in length, nine minutes longer than the theatrical cut of the film, and is an oddity that is no doubt of interest to diehard “Ghostbusters” fans. The preview cut, which is presented in standard definition on the Blu-ray, also comes with an optional commentary from Associate Producer Joe Medjuck and Editor Sheldon Khan. 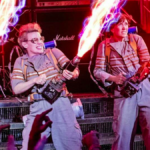 Other new bonus features for the original “Ghostbusters” include a look at two scenes from the film with commentary by director Ivan Reitman and his son Jason Reitman, who directed “Ghostbusters: Afterlife”; eight auditions for the role of Dana Barrett featuring Denise Crosby, Kelly LeBrock and more; a 90-minute documentary about the making of the film and the history of the franchise; over an hour of raw dailies from the film; and the full TV broadcast version of the film I(in Standard Definition) featuring alternate TV-safe takes.

New bonus features for “Ghostbusters II” include more scene commentary from Ivan and Jason Reitman; 19 deleted scenes that have never been seen before, a soundtrack promo and the full TV broadcast version (again in Standard Definition). The Blu-rays for both films also include previously released bonus features.

Not included in this box set is director Paul Feig’s female-fronted (and, frankly, underrated) 2016 film “Ghostbusters” (aka “Ghostbusters: Answer the Call”), an omission Feig called out on Twitter recently by tagging Sony Pictures directly and saying this “must be a mistake.” He added, “We do have a lot of fans and Bill, Dan and Ernie were in it and it won the Kids Choice Award for Best Feature Film the year it came out. So, I guess this was just an oversight?” 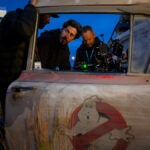