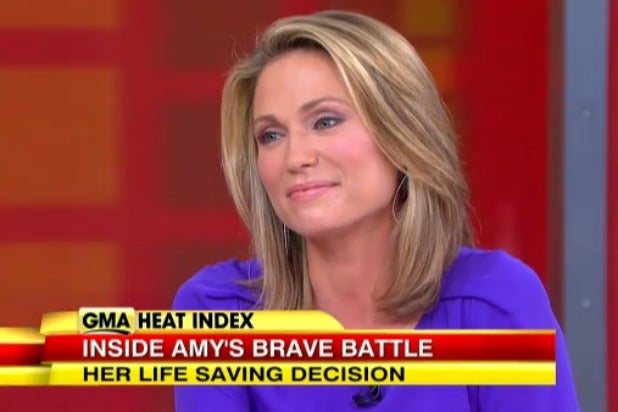 Amy Robach says she plans to appear on “Good Morning America” as she undergoes chemotherapy for cancer she discovered in an on-camera health segment.

Robach underwent a bilateral mastectomy last month in which doctors discovered the cancer had spread. But she returned to the show this week to say goodbye to weatherman Sam Champion, who is departing ABC News for the Weather Channel, and to talk Thursday about her fight with cancer.

She said on “GMA” Thursday that she plans to work through chemo, just like Robin Roberts did while battling blood-and-bone cancer.

“Chemo begins for me in a little bit under two weeks,” Robach said. “I’m going to work through it. I saw Robin do it. I know how strong you were. And you give me strength, Robin. Because it is important to get up and have something to do each day, even if you don’t feel great and even if you feel crappy.”

“I know they’ve got all these new drugs to make it a little bit less difficult,” she added. “I’ve got four months of chemo. Some people have it harder than I do. So I will take it hour by hour.”