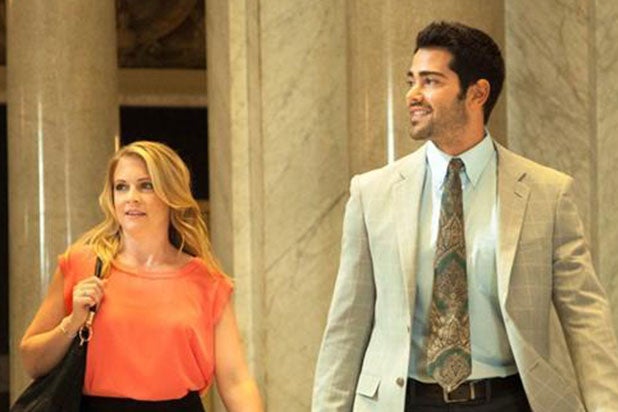 “God’s Not Dead 2” is getting sacrilegious reviews from critics, scoring a meager 13 percent on Rotten Tomatoes after opening in limited theaters Friday.

Reviews have been describing the most recent faith-based film as “a sad little prison of a movie” and a “stupid, horribly-made” film. And TheWrap’s film critic Dave White agreed, titling his review, “Religious Courtroom Drama Should be Held in Contempt.”

“[The] sequel to the faith-based hit feels less heavy-handed but still treats Christian belief as an argument to be won, and non-believers as villains to be crushed,” he wrote, comparing the sequel to the 2014 original.

Starring Melissa Joan Hart and and Jesse Metcalfe, the film follows a high school teacher who gets into trouble when reasonably answering a question about Jesus.

“God’s Not Dead” was a surprise hit that made $60.8 million domestically on an extremely low budget of $2 million. But critics seem to agree that history will not repeat itself this time around.

Phil Villarreal, OK! Magazine:
“‘God’s Not Dead 2’ is a pathetically inept take at proselytizing, bludgeoning the audience with moral lessons in increasingly bizarre and silly ways. While not bad as unintended comedy or the basis of Choose Your Own Drinking Game, it’s a sad little prison of a movie.”

Bill Zwecker, Chicago Sun-Times:
“I only wish there had been more subtlety in the way the ‘God’s Not Dead 2’ filmmakers had attempted to make their case. The agenda here is front and center from start to finish, and while the actors do a yeoman’s job in presenting their characters with aplomb (especially Jesse Metcalfe, as Wesley’s lawyer), the entire film simply comes off as a two-hour, jazzed-up movie version of a sermon.”

Matt Prigge, Metro:
“The ‘God’s Not Dead’ films are only interested in fanning the flames of a nonsense culture war that, thanks to films like this, may have finally come true. One day, hopefully, we’ll look back and laugh at this psychedelically bizarre era, but the sight of Pat Boone dancing on crutches while crowing to a ceiling ‘God! You did it!’ would be funny in any age.”

Sheila O’Malley, RogerEbert.com:
“It’s inadvertently hilarious. There are serious movies about the Christian faith, about the persecution of the faithful, and about the intolerance that goes both ways. ‘God’s Not Dead 2’ is not one of them.”

Jordan Hoffman, The Guardian:
“‘God’s Not Dead 2’ is a much better movie than ‘God’s Not Dead,’ but that’s a bit like saying a glass of milk left on the table hasn’t curdled and is merely sour.”

Philip Martin, Arkansas Online:
“‘God’s Not Dead 2’ isn’t so much — to borrow a prefix from anthropologist Clifford Geertz — an anti-anti-Christian film as an anti-nuance film. It relies on an unrealistic case not because realistic cases don’t exist (I imagine they do) but because it’s much easier to win when you get to make up the other side’s arguments. While there are some very interesting moments in ‘God’s Not Dead 2’ –like the testimonies of former homicide detective J. Warner Wallace, and pastor turned author Rice Broocks, both of whom appear as themselves in the movie — it’s a rigged debate.”

Willie Waffle, WaffleMovies.com:
“This movie made me long for a chance to see ‘Batman v Superman,’ again … Don’t hate ‘God’s Not Dead 2’ because of its themes and faith. Hate it for being a stupid, horribly made movie.”