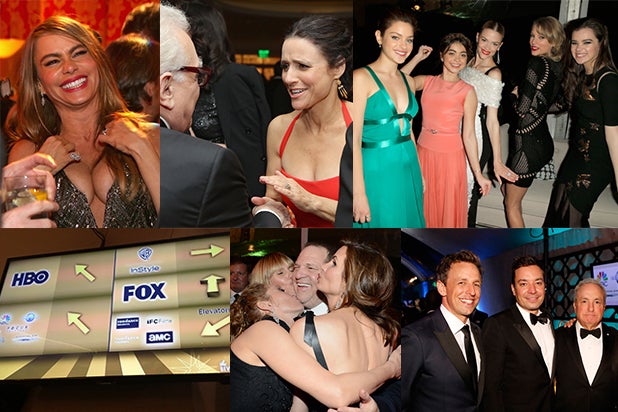 It’s the Hanukkah of award shows: one twinkly night that lasts for over a week.

While the Golden Globes’ swell in popularity despite an increasingly savvy audience is something of a miracle, the industry’s persistent wholesale buy-in simultaneously reinforces the gap they enjoy over awards show wannabes, such as November’s first televised Hollywood Film Awards.

Prepare for week of parties with buyer’s, bosses, and big shots. Assistants, be sure to get your bosses on these lists.

Pick Your Party or Click to Jump to a Day

Now, they point their iconic arrow at the Globes for the first time. At Comic-Con, Buzzfeed bucked the trend of Hollywood’s elitist glossy invasion with rooftop beer pong and a smart happy-hour slot to bridge day and night. On Thursday night, 200 of Buzzfeed editorial’s  invited guests (separate from the mushrooming Motion Picture group) will first hit the open bar before getting creative in the GIF booth, and departing with an awards season survival tote.

This year, they are calling it “An Excuse for Hollywood to Drink Together.” Next year, with $50 million in seed that Buzzfeed Motion Pictures is using to launch a studio, BF’s excuse to drink together could be at the Globes themselves.

**New Location**
Weinstein and Netflix Party
Robinson’ May Lot, After the Globes

These two have linked up to co-host bashes before — and during daylight hours, they have existing business for distribution of both library titles and new releases.

What’s new here is the location. Technically, they are moving  “off campus” to the Robinson’s May lot across the driveway and red carpet at the Hilton, and out of the former Trader Vics tent space in the back.

It’s always been fun, festive, late and loud in the far corner of the Beverly Hilton. In the past, there has been couch dancing, always a few unaffiliated A-listers (think Madonna) or gossip fixtures (a la Lindsay Lohan, Kim Kardashian) and with so many films, partners on those films, and partners on the party (sometimes jet companies, this year with Marie Claire, Heineken, Fiji Water, and Lexus), it will be another celebratory mood with the party royals. Wins for “The Imitation Game” and Amy Adams in “Big Eyes” would thicken the lather.

On this same night in 2014, Diane von Furstenberg seized upon the Friday timeslot to preview the “Journey of a Dress” exhibit. There, Anna Wintour perched by the entrance as Anderson Cooper and Andy Cohen cut through the mashup guest list from fashion and entertainment. Continuing in the template, this exhibit will open to the public once all the pasties have been swept up and the carpet re-rolled.

One of the best performances — this party. The scene inside last year.

Proprietor Andre Balasz joins with W’s Stefano Tonchi and Lynn Hirschberg for this annual retreat. It’s a secluded soiree with limited visibility by design, but like all top fashion, photographs really nicely (See above, from the penthouse deck last year.) The beautiful faces inside, and all the major contenders help.

Cadillac rolls guests in. Dom Perignon keeps the party going. This is a top pick of the weekend.

This is now a mainstay of any awards weekend. Tony Schubert hatches a new look for each of these parties, as president Scott Keogh, Andrew Lipman, and Michael Patrick zoom nominees and industry pals to the first cocktails of the weekend.

If you cropped the Golden Globes down to just “the pit down front” and exported it to the Four Seasons on Friday, you’d land with this gathering. The densest congregation of the week just got thicker. With 11 honored films this year instead of 10, one of the most private events just became an even tougher ticket. The ensemble creative teams behind the top films and 10 top TV shows (networks only have 2) mix and match over lunch.

Emmy Rossum and Michael Pena will host the brunch and announce the grant winners, totaling $75,000 for emerging filmmakers. Film Independent board member Ava DuVernay is having a great year, with her film “Selma” nominated in five categories, including Best Feature and Best Director. The “Spirits” take place six weeks to the minute after this brunch, the freak menu where Boa the steakhouse serves breakfast food.

Fassbender and Steve McQueen in a sea of Tom Hanks, DiCaprio, and Sandra Bullock at the BAFTA Tea last January. (Getty Images)

Everybody shows up to this one, despite being the busiest day for parties and wavering immunities to the lure of NFL divisional round playoffs. Even press-shy, party-shy, scene-allergic Michael Fassbender (in a leather jacket and a t-shirt) came and worked the carpet to the very last print reporter as the aforementioned snuck out a back door to dodge the bursting lobby. The Wiston Estate is shipping over bubbly from abroad for the event, while Jaguar, Mulberry, Heineken, and American Airlines all see the potential, and have kicked in to sponsor.

Matt Blank, nominee for “Ray Donovan” Jon Voight, and David Nevins on the eve of another awards show, the Emmys, this past August. (Eric Charbonneau/AP Invision)

Nope, you can’t get a reservation at Craig’s the night before Golden Globes. WME has all the tables. Their cocktail party will be intimate on the west end of Melrose.

There will be more bottles of Moët champagne (1,500 minis and 125 cases of magnums) than attendees at the Golden Globes themselves (1,300). There are three liters of bubbly on every table, with a magnum each of Moët & Chandon 2004 Grand Vintage Brut and Rosé. So there will be pink on the tables for the first time.

99% of the 1,300 are too social, too nervous, too dressed up or just not hungry at 4:00 p.m. to want to pick at what lurks under Executive Chef Troy Thompson’s kale chip on the main course: “Roasted Onion-Marinated Filet Mignon and Slow-Baked Arctic Char with Potato Croquette, Heirloom Cherries and Tomato Fondue.” (FYI: It’s not kosher.) Cheers!

So little has changed in the after-party world, that you could sneak by with a click back to last year’s preview here:

Here’s the recurring lineup in and around the Beverly Hilton, with a few new tweaks.

During the show, it’s an eat-and-watch sit-down dinner. At 8:30 p.m., thirty minutes after the credits roll, it opens up to the party guests. Insider tip: Get there early. The line backs up quickly and it’s a bottle neck getting down the hall to the left past the Hilton’s lobby bar.

Lady Gaga and Kathy Hilton celebrate HBO’s wins at Circa 55 a year ago. (Getty Images)

Known for: Reminding you that HBO has a lot of tentacles beyond the hour long drama. (See: Lady Gaga, HBO documentarian, above.)

HBO sits atop the heap with 15 nominations, and always sits “below” the crowd, with a sprawling indoor-outdoor takeover of the pool and Circa 55 restaurants.

Bring a drink to sip while sitting on the massive line snaking through the hallway and eventually down the stairs. There is always a huge turnout for HBO, and not just for those who come to eat. In truth, it is the best food lineup in the building after the show, but catching Louis C.K. by the pool or a Martin Scorsese and Julia Louis-Dreyfus meet-and-greet is greater sustenance for a long day.

Meanwhile, at the same time as this bash, they premiere new seasons of “Girls” and “Looking,” an easy channel change for the home viewing audience.

The Globes’ host network, and the red carpet kingpin cousins at E! celebrate more of the night than the actual awards atop the parking garage. James Spader (“The Blacklist”) is NBC’s lone nominee, while Universal’s “Unbroken” with Angelina Jolie would have been a guaranteed attendee, but got no looks from the HFPA.

Fox
Robinson’s May Lot Across the driveway, by the Weinsteins

AMC (no nominations for “Mad Men” or “Walking Dead”) is on the bench this year. Sony is, not surprisingly, keeping mum, while Sony Pictures Classics has “Foxcatcher,” “Leviathan,” “Still Alice,” and “Whiplash” in the mix.

Nathalie Dubois runs a tight ship. Her global suite – in Cannes she brought in tailors from the Middle East and elixirs from France – runs on appointments only. I’ve seen her make talent wait outside, but in my experience, it’s worth playing by the rules.

The envy of every civilian: sparkling white teeth. They will also be doing hair, manicures, chair massages, and makeup touch-ups by Priv. Pivotal PR handles RSVPs.

There’s a VIP and media day ahead of time to get the word out on the good loot inside. They keep a tighter list than most suites and in return, have drawn talent both from within HBO (Joe Manganiello) and beyond (like Globes host, Tina Fey.) PANDORA Jewelry is the lead sponsor. In the past, big names like Motorola and TiVo have made it Christmas in January. This year, Nautica and Big Buddha handbags are on tap. Fox Greenberg handles media while MediaPlacement brings in the talent.

This party preview will be continually updated on a rolling basis, with coverage from the events to follow on TheWrap and in real time on @CelebSightings. Send invitations, updates, and tips to
Mikey@thechimp.net.