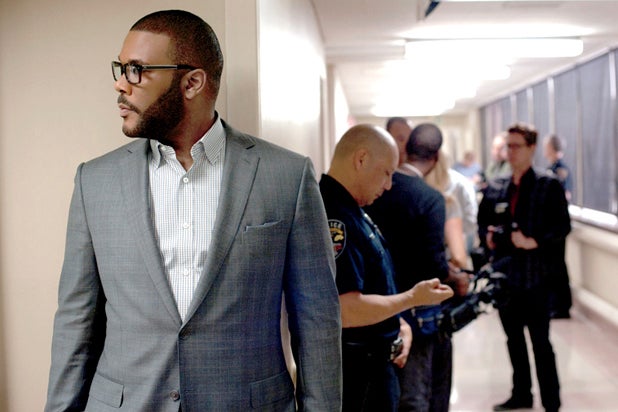 David Fincher directed two actors who are directors in their own right in his new film “Gone Girl,” but Tyler Perry was more than happy to take the backseat and allow Fincher to do his thing.

Lead star Ben Affleck may have won a best director Golden Globe and best picture Oscar for “Argo,” but Perry has over a dozen directorial credits under his belt — many of which are for films that also see him donning a fat suit or a dress — and he was still in awe of Fincher’s style behind the camera.

“His eyes and brain should be donated to science. The man sees more than the average person in his vision. He’s looking for something, and until he sees it, he doesn’t move on. I respect that,” Perry explained in a new interview with GQ, adding that Fincher’s famous penchant for doing tons of takes for each scene took some getting used to, especially since Perry himself does very few when he’s in the director’s chair.

“That was really different for me,” he said, revealing: “David Fincher is a film director. Okay? I’m just a storyteller who picked up the camera and said, ‘Point it in that direction.'”

In “Gone Girl,” Perry plays defense attorney to Affleck, whose character Nick Dunne is accused of doing something nefarious to his wife (Rosamund Pike) after she disappears on their fifth anniversary.

While Perry’s Tanner Bolt is dubbed the “Dickhead Defender,” the normally larger-than-life actor was content to tone down his brashness for the movie. “I think it was his expertise and his slickness that was on display, rather than the dickhead stuff,” he told GQ.

The creator of “Tyler Perry‘s House of Payne” and “Madea’s Family Reunion” doesn’t have any desire for the drama to be “Tyler Perry‘s Gone Girl” either and was happy to take a backseat in the marketing.

“I’m pretty sure that between David Fincher and the history of the book itself, that movie’s gonna be fine,” he said. “It doesn’t need any help from Tyler Perry.”