In this morning’s roundup of Oscar news ‘n’ notes from around the web, the critics love at least one of Spike Jonze’s Sendak movies, and the animated-feature numbers game goes on and on.

Spike Jonze’s other Maurice Sendak movie, his short documentary “Tell Them Anything You Want: A Portrait of Maurice Sendak,” which is currently on HBO but has also made the Oscar doc-short shortlist, has been picking up rave reviews since its Wednesday debut. Here’s a take from Patrick Goldstein, who calls it Jonze’s “most soulful” Sendak film. Guess that puts him alongside fellow L.A. Timesman Kenneth Turan on the negative side of the “Where the Wild Things Are” ledger. (The Big Picture) 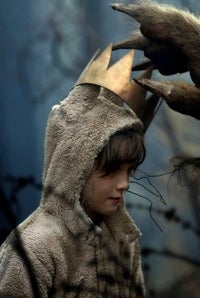 The New York Times, on the other hand, rhapsodized about the film. “[A] work of art that stands up to its source and, in some instances, surpasses it,” says Manohla Dargis.

Three nominees in the best-animated feature category? Or five? Do we care? I guess some of us do. When I first wrote about the Oscar animated-feature race a week and a half ago, I’d been told by what I figured were reliable sources that there probably wouldn’t be enough qualifying 2009 releases to trigger the jump from three to five nominees, which takes place if 16 features qualify. Almost immediately, though, I started hearing that there might be enough after all – one list I received contained 19 potential releases. After a spate of stories about the expanded slate, a few of those films began to fall by the wayside: the Belgian film "A Town Called Panic," for instance, appears not be be receiving a qualifying run. Now, Tom O’Neil writes that the Japanese film “Evangelion 1.0: You Are (Not) Alone,” was released too early to qualify, bringing the number of possibilities down to 15. Kris Tapley counters by finding two more potential entrants: “The Missing Lynx,” which he says might get a qualifying run on November 13, and “The Book of Kells.” I’d heard that Sylvain Chomet’s “The Illusionist” might also make the cut, but that now appears to be a 2010 release. The bottom line: everybody’s writing about three nominees, five nominees, three nominees … and none of us really know for sure. The deadline for submissions is November 2, and the Academy will put us all out of our misery by announcing the qualifying films a couple of weeks later. (Gold Derby)  (In Contention)

On the 20th anniversary of the Oscar snub for “Do the Right Thing,” Guy Lodge looks at the high hopes riding on a variety of 2009 films that don’t come from the straight white male perspective, particularly “Precious.” (In Contention)

Anne Thompson singles out 10 films (out of 65) she thinks might have the best shot in the foreign-language category. France, Germany and Canada top her list. Of course, it’s notoriously hard to predict Oscar voters in the categories, like this one, where they actually have to see the movies before they can vote. (Thompson on Hollywood)

indieWIRE makes a case for 11 performances that ought not be overlooked come awards time. Their honor roll includes some viable longshots (Penelope Cruz in “Broken Embraces,” Michelle Monaghan in “Trucker,” Hal Holbrook in “That Evening Sun,” with Jeremy Renner in “The Hurt Locker” being perhaps the likeliest), and some that are perhaps the height of wishful thinking (Charlotte Gainsbourgh in “Antichrist”).

Speaking of longshots, there’s now an Internet-based campaign to draw attention to Sam Rockwell’s performance in “Moon.” Here’s base camp.