In this morning’s roundup of Oscar news ‘n’ notes from around the web, Jacko gets an Oscar campaign and Jackman opts out of an Oscar gig.

Apparently, Sony Pictures has been listening to Elizabeth Taylor. Or maybe they read my piece from a couple of days ago. Or maybe they had the idea all by themselves. At any rate, a Sony spokesman tells the Associated Press that the company plans to submit the Michael Jackson film “This Is It” to the Oscars in the best picture category and “other appropriate categories.” (It’s eligible in some, though probably ineligible in more.) And while there aren’t really any categories in which Jackson himself could be a nominee, director Kenny Ortega advances a thoughtful argument in favor of his star’s candidacy: “He deserves one. Come on people.” (The AP via Yahoo! News)

Michael Fleming says sources tell him that Hugh Jackman has officially declined to return as the Oscar host. No surprise, as this has been in the air since before Bill Mechanic and Adam Shankman were named as producers. (BF Deal Memo) 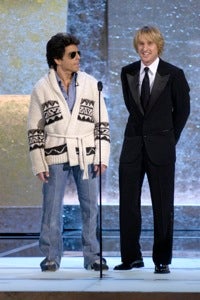 Tom O’Neil takes the votes of all 16 Oscar pundits he recently polled, puts them together and comes up with a big list in which the top films are “The Hurt Locker” and “Invictus,” followed (in order) by “Precious,” “Up in the Air,” “Up,” “Nine,” “The Lovely Bones,” “Avatar,” “An Education” and “Inglourious Basterds.” Is that the kind of lineup that’ll revitalize the Oscar race and invigorate the show? I don’t think so, either.  (Gold Derby)

Sasha Stone points out that O’Neil’s list is not a measure of who’s actually “leading” in the Oscar race. It’s a big game, and a measure of how outside perceptions are shifting. (Awards Daily)

indieWIRE looks at “A Single Man” and at the post-“Brokeback Mountain” landscape of gay-themed films at the Oscars. Peter Knegt starts by looking for a trend in the fact that three potential best-picture nominees are directed by openly gay filmmakers (Tom Ford for “A Single Man,” Lee Daniels for “Precious” and Rob Marshall for “Nine”), but then decides that Daniels’ nomination, for instance, would be notable more for his race than his sexuality: “I think it’s reasonable to suggest that in the Hollywood power hierarchy … being gay is not as much of a disadvantage as say, being female or black.”

Gerard Kennedy analyzes the editing category, singling out “The Hurt Locker,” anticipating great things from “Nine” and upgrading the chances of “District 9” and “Inglourious Basterds.” His bottom line: it’s an intriguing category. Hard to argue with that. (In Contention)

USA Today examines the “mainstream genres” that could benefit from an expanded best-picture list, and picks one film from each field that might have a shot. Documentary: “Capitalism: A Love Story.” Animated: “Up.” Tech-loaded blockbuster: “Avatar.” Foreign-language film: “The White Ribbon.” Action thriller: “Inglourious Basterds.” Adult comedy: “It’s Complicated.” I’d say half of her choices have a real shot, but I’m not sure how documentaries and foreign-language films qualify as “mainstream” genres.

Variety picks 10 actors to watch. Of the names on their list , Christoph Waltz and Jeremy Renner have Oscar heat. Michael Stuhlbarg’s a longshot. Tom Hardy a much longer shot. And the other six don’t really figure in the picture.