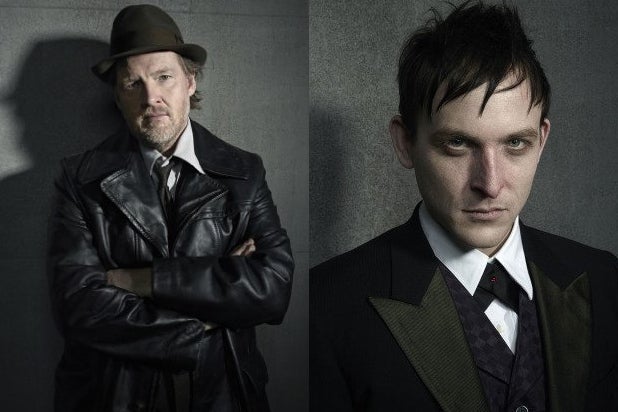 Fox is taking viewers to the core of the DC Comics universe — Gotham City — on its aptly named Batman prequel show.

In “Gotham,” the titular city takes precedent over any hero or villain that lives within its dark, corrupt boundaries. Even the name actors listed at the top of the series’ IMDb page understand that the banner above them dictates the storyline, which has been described in numerous ways.

“I think that the city is the story, the most important thing,” co-star Donal Logue told TheWrap. “But the handheld camera is on Jim’s (Gordon, played by Ben McKenzie) shoulder.”

The former “Sons of Anarchy” regular discussed how Bullock is still considered as being on the right side of Gotham City by invoking the old idiom, “The devil you know is better than the devil you don’t.” And as Logue says, in “‘Gotham,’ there are ‘devils’ with a ‘small d’ and ‘Devils’ with a ‘big D.'”

And that mirrors real life, the actor added. “You have to do business with some of them — that’s the way it is in law enforcement anyway.”

According to Logue, it’s that very attempt to “merge light and dark” that defines the show.

One of those bad guys that Bullock will pragmatically do business with is Oswald Cobblepot — a.k.a. the Penguin — played marvelously by Robin Lord Taylor. The relative newcomer told TheWrap that he loved the liberties that show creator Bruno Heller allowed him to take with one of the more iconic characters in the universe.

“I’m just so lucky that I get to start with him as Oswald,” Taylor explained. “I didn’t feel a lot of pressure to stay true to what Burgess Meredith did or what Danny DeVito did.”

That said, the actor definitely hung onto some of the character’s classic traits. As Taylor put it, the Penguin’s ability to be funny and charming “adds to the menace.”

But it’s not all fun and games. As far as ratings go, Fox could really use a hit.

Still, not all hope is lost. At least, not yet — the network has a superhero to save them.

“Gotham” is clearly the new series that Fox is pinning its expectations on, something that is not lost on the cast.

“It’s a casual conversation that people have every once in a while,” Taylor admitted. “It’s all about tempering their expectations … you just want to make the best show possible.

“We all feel pressure to a certain extent. I know that it’s all about winning the night but at the same time, if the show is good, people will stick with it,” he concluded. “And I really do believe that it’s good.”