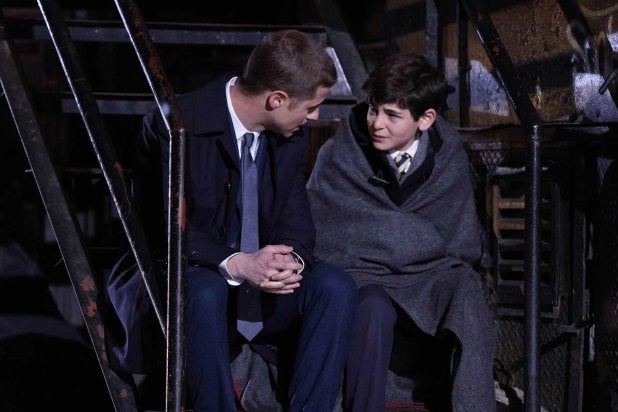 “Gotham” executive producer Danny Cannon and creator/EP Bruno Heller spent the better part of Sunday still trying to convince media that their Fox show is not a Batman show.

“I was relieved when I found out there was no Batman, I don’t want to stand shoulder to shoulder with Chris Nolan,” Cannon told TheWrap. “Chris Nolan’s masterpiece and on a TV budget? I really don’t want to do that.”

TheWrap sat down with Cannon and Heller following their Television Critics Association panel this past weekend to try to make a little more sense about what the superhero prequel is about. Though their creative visions are consistent, press and fans alike seem to be confused over this interpretation of the DC Comics property.

Heller explained his reasoning: “For me I always lose interest as soon as he gets into the costume. You can’t tell human stories with super-humans in the frame.”

Still, Fox surely doesn’t want to turn away any Batman diehards. The network is counting on “Gotham” to be its own hero, similar to this past season’s freshman ratings savior “Sleepy Hollow.”

But don’t expect Cannon to predict the show’s ratings fate.

“I still don’t know how to read ratings — there are so many numbers,” he said. “If they are good, everyone loves them, if they are bad, they tell you what is wrong with them … I just want to be able to stand by the box set years from now.”

Though both producers would prefer that potential box set to have fewer DVDs in it. Neither are thrilled with the network’s 16-episode order, admitting that the number is a little daunting and could hurt the creative process.

“It is the precise difference between chess and speed chess,” Heller said. “Network TV is speed chess. So much of it — more than anything — is improvisational simply because you get the actors to sit, you get the director, you get the crew and then you see what the hell you can come up with.”

In terms of the drama’s appeal, Fox and the producers are well-aware of the audience they are targeting. The males will likely show up automatically, the females will take a little more work.

“It was important to have a strong, powerful female character that is unapologetically a player,” Heller said. “And not because she’s attractive or sexy — that’s not the source of her power.”

He added: “It’s funny, I didn’t have Jada in mind while writing the character, but as soon as I saw what she was doing, she had taken it. It is a powerful archetype that you don’t see nearly enough of — which is an unapologetic, powerful, kick-ass bad woman. ‘Bad’ in both senses of the word.”

So, the big question: Will we ever see Batman? Logically, that mostly depends on how long the show is on the air, considering Bruce Wayne begins his journey at about 12 years-old on the Fox show.

In the Frank Miller comics, Wayne begins his worldly travels around 14, returning to Gotham 18 years later. In real-time, getting there would require a “Simpsons”-esque Fox run.

Still, Heller isn’t opposed to reaching that logical, loyal conclusion, should it work out that way via a ton of seasons or a time warp.

“I think there is a natural, sort of Moby Dick ending, if you’d like — which is not a clever ending — but as soon as Batman appears, that is the end of the show,” he told TheWrap. “Enter Batman; exit the show.”

“Gotham” premieres on Sept. 22 on Fox. Wednesday July 23 has been declared “Batman Day” by DC Entertainment.