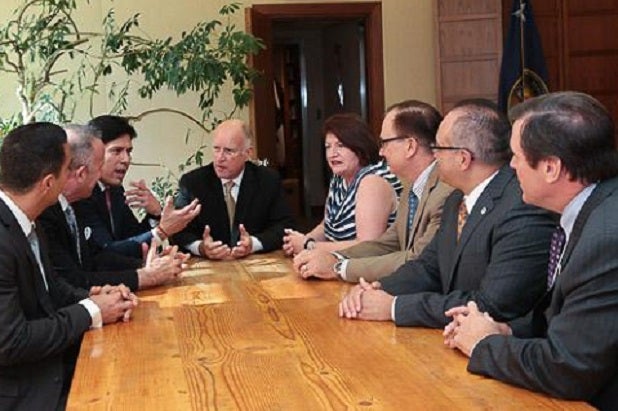 Gov. Jerry Brown will approve legislation to significantly beef up California’s TV and film tax credit program after reaching an 11th-hour deal that cuts back its funding with the sponsors of the measure. The final figure will be $330 million annually for five years for the measure, which is likely to come to the state Senate floor on Wednesday or Thursday.

That’s less than the $400 million approved by the Senate Appropriations Committee two weeks ago, but a big improvement over the $100 million allotted under the current plan. The deal on the measure, co-authored by Assemblymen Raul Bocanegra (D-Pacoima) and Mike Gatto (D-Los Angeles), assures approval by Gov. Brown once it has cleared the Senate.

Also read: The $420 Million Question: How Much Will California Set Aside for TV, Film Tax Credits?

“This law will make key improvements in our film and television tax credit program and put thousands of Californians to work,” said Gov. Brown.

Dropping the price tag for Assembly Bill 1839 will in theory lessen the criticism Gov. Brown will face from opponents of the bill including the state’s largest teachers and school employees unions, who are among the governor’s major supporters.

“We’re letting the entertainment industry know that California is open for business in a big way,” Assemblyman Gatto told TheWrap.

While not matching the $420 million annually that New York offers, the expansion of California’s program will level the playing field. New York, Louisiana and Georgia, as well as Canada and the U.K., have siphoned off huge chunks of California’s once dominant TV and film production industry by offering their own juicy tax breaks over the past several years.

Winning the governor’s support is a big win for the bill’s backers, a coalition of studios, Hollywood unions, the post-production industry, talent agents, local governments, film commissions and small vendors like caterers. Los Angeles Mayor Eric Garcetti has been at the forefront of the push for the bill.

“This legislation means that the long journey started by our work with Tom Sherak and continued with Ken Ziffren is ending in success for California’s middle class,” Mayor Garcetti said Wednesday.

In addition to extending the existing program, the bill also would for the first time allow movies with budgets greater than $75 million and new TV network dramas to qualify for the credits, which can cover up to 25 percent of a production.

The measure also will do away with the lottery currently used to determine initial eligibility for the incentives. The current program is seriously over-subscribed; in June, just 23 projects out of a record 497 applications were initially accepted.

Replacing it will be a “competitive process based on job creation” that will take effect starting in January 2016, with two allocation cycles per year.

The California Film Commission will create regulations to develop a scoring system for applicants, subject to the approval of GoBiz, the governor’s Office of Business and Economic Development. The scoring system will be based on a formula that factors in aggregate employee compensation divided by the amount of tax credit requested.

Additionally, applicants will get bonus points if they commit to shoot at least 75 percent of principal photography in the state and to spend 75 percent of their production budget in California. The use of in-state post-production facilities will also help applicants’ bids.

“We’re sending a powerful signal today that we are 100 percent committed to keeping the cameras rolling and bright lights shining in our state for years to come,” said De León.