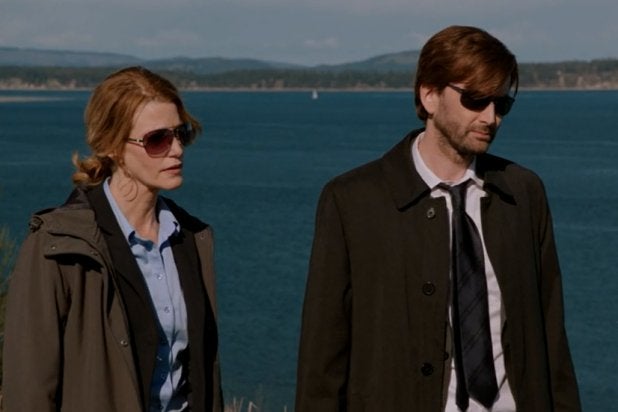 Following on the very hot heels of HBO’s “True Detective” and FX’s “Fargo,” Fox debuted its own limited crime drama with the U.S. remake “Gracepoint.” Based on the British original “Broadchurch,” David Tennant (“Doctor Who”) stars in both series as the lead detective investigating the murder of a young boy in a small town.

BBC America aired “Broadchurch” stateside beginning in August 2013, so for some viewers the series premiere of “Gracepoint” will look very familiar. It is virtually identical in every way, from the various personalities that make up the town, to the facts presented behind the mysterious death of the boy at the center of the murder mystery.

Still, I couldn’t help but feel it might remind more people in America of AMC’s “The Killing,” itself a remake of a foreign series. Unlike “True Detective,” which was really the story of two men, and the far more surreal “Fargo,” “Gracepoint” is a whodunnit story.

Like “The Killing,” we were immediately introduced to the victim’s family, as well as all of the potential suspects, otherwise known as the townsfolk. Fox even encouraged fans to be wary of everyone they meet by touting the show’s accompanying website, SuspectEveryone.com, much as AMC did with its tagline “Who killed Rosie Larsen?”

But unlike “The Killing,” we will get the answers at the end of this 10-episode season.

The problem is that “Gracepoint” lacks the expression and personality of either “The Killing” or “Broadchurch.” A combination of perfect casting and beautiful direction and cinematography elevated those shows to the levels of fine cinema. You believed the communities, and you believed that these were real small-town people rocked by this murder.

With “Gracepoint,” all the mood and atmosphere is somehow stripped away and it looks and feels like every other network show. Everything is bright, camera shots are cut quickly and crisply as we don’t linger on scenery. In all honesty, it has about as much flair and style as CBS’s “Under the Dome.”

In “Broadchurch,” the cliff at the scene of the crime felt like a looming presence, haunting both the townsfolk and the viewers throughout the series. Here it is just a place for characters to spout some lines. Maybe there’s something to be said for the gloomy clouds and fog of “Broadchurch” to create a somber mood. Sunny California is a pale substitution.

David Tennant was just as haunted in the British original, and he’s a brilliant performer, so what happened? Maybe it’s the American accent he tries to pull off — the result is an awkward accent with hints of his native Scottish — or maybe it’s because he’s done all of this before, but he comes across as almost bored in his performance.

Anna Gunn (“Breaking Bad”) is better as Detective Ellie Miller, and is in fact the strongest performer on the show, perhaps followed by Michael Pena (“American Hustle) as Mark, the father of the murdered boy, Danny. Unfortunately, Virginia Kull (“Boardwalk Empire”) as his wife Beth fails to capture the raw emotional grief as the boy’s mother in a believable way as Michelle Forbes did in “The Killing,” and Jodie Whitaker managed in the same role on “Broadchurch.”

There is a scene early on in both shows where Beth is stopped in a traffic jam while searching for her son, whom she’s just realized has been missing since the previous night. When she hears that a body has been found on the beach, she begins to run between the cars toward the scene of the crime, knowing in her heart that her son is dead.

In both shows, the dramatic scene is slowed down to capture the raw emotion on her face. But while Whitaker’s performance in “Broadchurch” is absolutely heartbreaking, Kull has virtually no emotion on display at all.

She might as well have been running to catch a flight, but even then she’d probably look anxious or concerned. I can’t even think of a reason someone might run like that with no emotional response at all. It was so disconcerting that I actually rewound the scene to watch it again. I paused it to look at her face to try and see a mother who has just realized that she knows in her heart of hearts that her missing son is dead. It wasn’t there.

The role that is supposed to be the emotional center of the story fell completely flat, so thank goodness Pena stepped up when he insisted on seeing his son’s body. He showed genuine grief and regret in that scene. And as he shared that scene with multiple Emmy-winner Gunn, it was one of the most believable in the premiere.

As I was watching, though, I knew I was comparing the two shows and while it’s valid and understandable on the one hand, it’s also completely unfair on the other. The vast majority of viewers to Fox’s adaptation will have never seen “Broadchurch,” so they will only be judging this show on its own merits.

Taken on its own, “Gracepoint” is not a bad show, and in many ways it’s a fascinating and very compelling one. The opening scene with Mark making his way to work was both blatant and effective in introducing viewers to all of the players who will become suspects as the investigation unfolds.

The mystery itself is fascinating, and there is plenty of suspicious behavior to go around from various townsfolk. But while “The Killing” got lost in its red herrings, the 10-episode “Gracepoint” doesn’t have the time to do that. I don’t know how closely it will stick to the original, but one of its strengths was that it naturally followed an investigation so that suspects didn’t feel like red herrings so much as they felt like real suspects based on the evidence to that point.

Everyone has secrets, including Ellie’s son Tom (Jack Irvine), who was best friends with the dead boy. When he heard the news, he responded rather flatly and then asked for privacy. As soon as Ellie left the room, he deleted all messages to and from Danny on his phone and even took the drastic step of erasing his computer’s hard drive.

That he did this after she told him indicates he didn’t know his friend was dead, but it raises all kinds of red flags and questions. These are the kind of intriguing moments that will hook viewers and lure them back in next week to find out what’s going on and why. Plus, a 10-week commitment for a good mystery is nothing.

See video: ‘How to Get Away With Murder’ Reviews: At Least Critics Can Agree Viola Davis Is Fantastic

If it’s nothing more than a longer version of one of those, it could do very well. It’s just disappointing Fox didn’t try a little harder to capture the true essence of what made “Broadchurch” so special.

I was hoping to experience a fresh take on what was one of the most powerfully told explorations of a murder investigation I’d ever seen, but this Fox adaptation falls short in its premiere. It may very well turn out to be a very good show, but it could have been great.