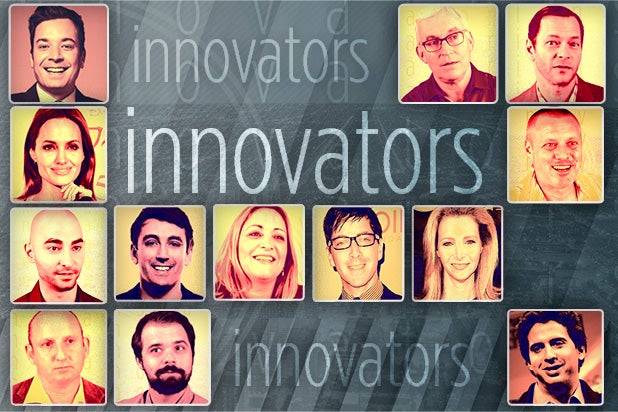 In our second annual Innovators List, TheWrap identifies the change agents who are thinking differently about the creation and distribution of entertainment.  We zeroed in on how some of the industry’s biggest stars are rewriting the rules of film and television production. Enjoy the list, watch the video inteviews… and be sure to catch our Innovators Panel at The Grill on October 7 in Beverly Hills.

Jeff Gaspin & Jon Klein, Co-Founders, TAPP
TAPP Chairman Gaspin (formerly of NBCUniversal) and CEO Klein (formerly of CNN and CBS) see a TV future ruled by subscription channels.  The two long-time friends launched TAPP (short for “TV App”) as a subscription-based, online video platform for big personalities such as Sarah Palin.  For $9.95 a month, Sarah Palin Channel subscribers get to watch the former Alaska Governor and GOP VP nominee discuss everything from Obamacare to her “award winning BBQ salmon recipe.”  TAPP’s backers include Discovery Communications and Google’s Eric Schmidt.  While it’s not yet clear how many people will pay $9.95 a month for such programming, TAPP is targeting a range of personalities in categories like sports, politics, religion, entertainment and fashion. – Jon Erlichman

Angelina Jolie, Actress-Director-Philanthropist
The latest phase of Angelina Jolie‘s ongoing metamorphosis may be her most impressive yet: In addition to being a globe-trotting activist, busy mother of six young kids, Oscar-winning actress and perpetual tabloid magnet, the 39-year-old is also the filmmaker behind one of the most highly anticipated films of the season. Early glimpses of “Unbroken,” an historical drama based on the life of war hero and Olympian Louis Zamperini, look equal parts gorgeous and harrowing, with a supreme lead performance out of soon-to-be breakout actor Jack O’Connell. Jolie will be credited for getting the best possible work out of the young Brit, and it’s likely that she’ll get an equally strong performance out of her now-husband, Brad Pitt, in her next directorial effort, “By the Sea.”

An industry unto herself, Jolie is blazing a trail for female talent while reaching deeper for her artistic voice, a seemingly impossible task under the constant spotlight that shines down on her. – Jordan Zakarin

Sev Ohanian, Indie Producer
Sev Ohanian made a name for himself producing the indie hit “Fruitvale Station.” And his unique approach to movie-making makes him an innovator. His first feature, “My Big Fat Armenian Film,” was shot on his dad’s home video camera and promoted on YouTube.  The film’s profits helped pay for his film school training at the University of Southern California’s School of Cinematic Arts (where he’s now an adjunct professor). In 2013, USC was part of a group of film schools that teamed up with Google Glass to see how the technology could be used in movies. The Ohanian-produced “SEEDS” was an instant hit and has been viewed nearly 2.5 million times (Watch it here!). “When new technology comes around, it’s best for everyone to embrace it and truly make it work for your story,” he tells The Wrap. Ohanian is currently working with a major studio on a small feature film to be distributed online.  He’s also talking with Google about ways to make more films with Google Glass. – Jon Erlichman

Jimmy Fallon, ‘Tonight Show’ Host
“Saturday Night Live” alum Jimmy Fallon didn’t go halfway when it came to making “The Tonight Show” his own after he inherited it from Jay Leno last year. Taking full advantage of the chops he had developed on “SNL” and “Late Night,” Fallon has gone beyond the traditional “Tonight Show” hosting duties of dishing out monologues and interviewing guests — his ability to mimic musical icons, develop bizarre stunts and slow-jam the news has led to a treasure trove of viral video moments and brought the  decades-old late-night institution into this century. Suddenly, Leno’s “Jaywalking” and “Headlines” segments seemed positively quaint by comparison. – Tim Kenneally

Ze Frank, President, BuzzFeed Motion Pictures
BuzzFeed has moved light years beyond cute cats.  The social news and entertainment company, which says it reaches more than 150 million monthly unique visitors (and caught Disney’s eye) is making a big push in Hollywood. BuzzFeed hired vlogging pioneer Frank in 2012 to lead its video efforts.  In August, BuzzFeed announced an infusion of $50 million in new financing led by the venture firm Andreessen Horowitz to expand its video operations, which have been rebranded as BuzzFeed Motion Pictures.  Frank is leading the unit as President, with help from Hollywood producer Michael Shamberg (“Pulp Fiction”) and comedian Jordan Peele (“Key & Peele”). The company has said BuzzFeed Motion Pictures will “focus on all moving images from a GIF to feature film and everything in between.” – Jon Erlichman

Beatriz Acevedo, Founder & President, MiTu Network
By now, you’ve heard about the dramatic rise of multi-channel networks, also known as MCNs. Disney’s acquisition of Maker Studios and Dreamworks Animation’s purchase of AwesomenessTV have brought a new level of credibility to YouTube channels and their stars.  Like Maker and Awesomeness, MiTu is an MCN, but one focused on programming for Latino audiences. TV industry veteran Beatriz Acevedo founded MiTu in 2012, along with her partners Doug Greiff and Roy Burstin.  The company says its videos have generated more than 6 billion views.  MiTu, which recently partnered with Maker, is also seeking to build on its YouTube audience.  It inked a licensing deal with AOL and teamed up with HLN on a late-night show inspired by MiTu’s “El Show w/ Chuey Martinez.” The company recently raised $10 million in funding, led by Upfront Ventures, an original investor in Maker. Other MiTu investors include the Chernin Group, Machinima co-founder Allen DeBevoise and Shari Redstone’s Advancit Capital.  — Jon Erlichman

Michael Heyward, CEO & Co-Founder, Whisper
Whisper is one of LA’s standout startups.  According to the company, the secret sharing app generates more than 6 billion page views per month. Los Angeles native Michael Heyward (son of  “Inspector Gadget” creator Andy Heyward) co-founded Whisper with Brad Books in 2012.  With the hiring of former Gawker staffer Neetzan Zimmerman and a BuzzFeed partnership, Whisper posts are getting widespread attention outside of the app.  And Hollywood is taking notice. Paramount has a marketing partnership with Whisper for the upcoming film, “Men, Women and Children.” Other Whisper entertainment partners include Hulu, Universal, MTV and VH1. – Jon Erlichman

Cody Simms, Managing Director, Techstars
The Disney Accelerator aims to bridge the gap between Hollywood and Silicon Valley. In its inaugural year, the program brings together entrepreneurs, mentors, creatives, investors and technologists to support the next generation of entertainment innovators. Operated by Cody Simms at Techstars, the accelerator provides 10 startup companies $120,000 and 15 weeks to advance their consumer entertainment and media products. During that time, the entrepreneurs receive access to stories, resources and relationships from across the Walt Disney Company with the goal of presenting to media and investors at an industry demo day. – Gina Hall
Lisa Kudrow & Dan Bucatinsky, Is Or Isn’t Entertainment
Emmy-winning actors Lisa Kudrow and Dan Bucatinsky formed their production company, Is Or Isn’t Entertainment, in 2003. The duo produced the online series, “Web Therapy.” It would live online for four seasons and get picked up by Showtime later, with a fourth season slated to premiere on the premium cable channel on Oct. 22. It continued online in the meantime and wrapped its fifth season this past February. Additionally, the company produced genealogy show “Who Do You Think You Are?,” which aired on NBC for three seasons, was canceled and then revived on TLC in 2013. And “The Comeback,” which was canceled by HBO after one season, returns this November nine years later for Season 2. The return season will explore the changes in the TV landscape over the last near-decade with Kudrow’s Valerie Cherish, which the producers know much about. Whether it’s broadcast, cable, or digital, Is Or Isn’t operates under the assumption that good content can exist in any platform and has made their projects an example of this.– Jethro Nededog

Jake Schwartz, CEO & Co-Founder, General Assembly
The skill set for success in Hollywood is changing.  Enter Jake Schwartz. The New York-based entrepreneur co-founded General Assembly in 2011 to help techies and non-techies alike beef up their training, offering courses on everything from iOS app development and UX design to digital marketing and data science. Along with online courses, General Assembly’s global footprint is growing quickly.  It has classes in more than a half dozen U.S. cities, as well as campuses in London, Hong Kong, Sydney and Melbourne.  GA, which already has a presence in Santa Monica, will be opening another campus in downtown LA later this year.  – Jon Erlichman