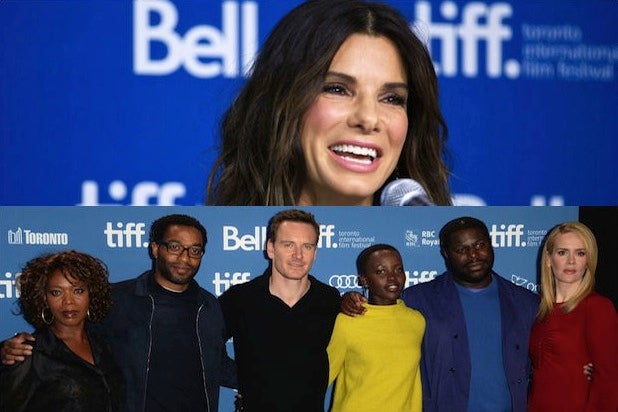 “Gravity” and “12 Years a Slave” both came out of the fall film festivals with a huge amount of momentum, winning rave reviews that catapulted them both to the forefront of the Oscar race and, in the case of “Gravity,” set the stage for impressive grosses.

But has the festival hype also hurt both films, as well as other movies like “Inside Llewyn Davis,” “Nebraska” and “All Is Lost?”

Certainly, it has led to some backlash, as voters and viewers begin to see films that have been praised so extravagantly that almost nothing could live up to the advance hype.

I’ve heard it repeatedly from Academy members, moviegoers and the media in recent weeks, and I’ve heard it about every movie that won raves at the festivals: It’s good, but I don’t think it’s as great as everybody said.

The buzz coming out of Venice, Telluride and Toronto has always been extreme, giving films like “Slumdog Millionaire” the momentum they took all the way to the Oscars, but building others like “Up in the Air” to a level they couldn’t sustain.

But this year, the festival raves have been particularly feverish, particularly around two films. As soon as “Gravity” and “12 Years a Slave” debuted, the former in Venice and the latter in Telluride, both films were proclaimed masterpieces and Oscar frontrunners. After “12 Years” premiered, at least one website said the Best Picture race was over.

You can’t really claim that the festival debuts did more harm than good, because they were instrumental in building up both films as must-sees. But in both cases, the rush to judgment, coupled with the echo chamber that exists in a festival environment and at the fall festivals in particular, was almost out of control.

By painting “Gravity” as “2001: A Space Odyssey” meets “Avatar,” and by saying that the rest of the field should pack it up and go home after “12 Years a Slave,” they created impossible expectations, and forced both to deal with the kind of backlash that most likely would not have existed if they had been allowed to debut under more sedate circumstances.

“The festivals helped ‘Gravity’ commercially, but I think they hurt it critically,” said one Oscar voter. “I had been told how brilliant and deep it was so many times that when I saw it and realized it was just a very entertaining movie that wasn’t deep at all, I was disappointed.”

Meanwhile, one pundit wrote a story noting that “12 Years a Slave” drew 500 people to the Academy’s Samuel Goldwyn Theater on a Sunday night and was greeted with strong applause – and acted as if that were a sign of weakness, because it didn’t draw 1,000 and get a sustained standing ovation.

(Full disclosure: That was this pundit.)

Also read:’12 Years a Slave’ vs. ‘Gravity’ – Who Filled the Seats at the Academy?

And this week, many stories on the first-weekend grosses of “12 Years” couple the news that it had a very strong per-screen average in its 18-screen opening with the caveat that the average was higher for the comparable rollouts of “Precious” in 2009 or “Black Swan” in 2010.

Skipping the festivals, of course, wouldn’t have been a better strategy, since the blogosphere would have run amok speculating that Warner Bros. and Fox Searchlight didn’t feel confident about “Gravity” and “12 Years.” Besides, the last six Best Picture winners – “Argo,” “The Artist,” “The King’s Speech,” “The Hurt Locker,” “Slumdog Millionaire” and “No Country for Old Men” – all did the festivals, including Toronto, which has a reputation as an easy fest at which to win raves.

But as Shakespeare’s Henry IV said, “uneasy lies the head that wears a crown” – and when that crown is bestowed at the film festivals and decorated with jewels spelling out words like masterpiece and frontrunner, the uneasiness can only get worse over a long trip that inevitably has to head down Backlash Blvd.