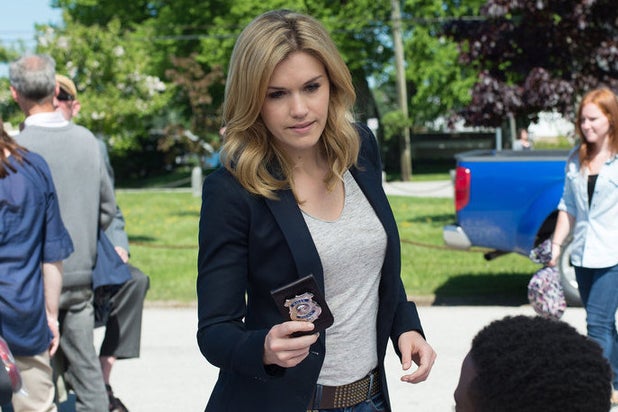 Syfy’s “Haven” pulled off a twist no one saw coming when it separated its leading lady into two distinct — but identical — characters.

Series star Emily Rose, who now plays both Audrey Parker and her evil counterpart Mara, told TheWrap that she’s glad she gets to keep both personalities for the foreseeable future.

“I was a little scared to let Mara go,” Rose said. “Fortunately, I didn’t have to do that.”

Mara and Audrey are now running around Haven, Maine, at the same time, though Audrey has a little more freedom, while her new twin sis is locked up in the cargo hold of Duke’s (Eric Balfour) boat.

It’s been a few years now since Audrey Parker was just Audrey, without any other personalities or memories plaguing her perpetual identity crisis.

“I had to re-familiarze myself with who Audrey really was and the strong aspects of her character,” Rose explained. “Mara is such a force to be reckoned with that I didn’t want Audrey to come off as weaker, or as somebody who wasn’t as sassy — because that’s something we’ve always admired about her, too. I approached it like, Audrey’s a little more pared down, a little more simple. Audrey really has a hold of Haven and knows what’s going on there so it was making sure she wasn’t afraid and always knew what she had to do. Always on a mission.”

But she does make a little time to reconnect with Nathan (Lucas Bryant), who’s now dealing with  not being able to feel Audrey’s touch anymore since the split. After four-plus seasons of being separated, Rose promises the partners will be partners again from now on.

“It’s a new Haven where you see these two people facing everything very much together,” she said. “They are one of my favorite things about the latter part of this season. The first seasons were sort of this cat-and-mouse of them discovering how they feel about each other, how they operate, working together as a partnership. Then she disappears and there’s fighting to get her back and fighting for love and all that. And now they’re back. They’re somewhat clear on the realities of the place that they live in and what they’re dealing with, and how they choose to move forward and love each other through these things is very sweet.”

Meanwhile, though Mara and Audrey have yet to come face to face, it should only be a matter of time before Rose is tasked with acting opposite herself, which is yet another new challenge for the actress who’s played various characters over the show’s five seasons.

It brings the show into “Orphan Black” territory for the first time, though Rose believes there have been similarities between the two shows from the beginning, and between her and that show’s star Tatiana Maslany.

“In a lot of respects, I feel like we don’t have the stage that ‘Orphan Black’ has or the forefrontness of their show,” Rose said. “But I feel like the premise of our show has been similar and we’ve been doing it for a long time, and I’ve been this person playing all these different characters. I don’t think our producers set out to find an actress who would do that right off the bat, like ‘Orphan Black.’ It’s built into the premise of the show, but how full-blown we went with it has really been a mutual discovery between all of us.”

Rose hasn’t met Maslany, though the various clones and multiple identical characters on “Haven” and “Orphan Black” were shaped by the same makeup artist: Stephen Lynch. He did “Haven” for three seasons before moving on to help launch BBC America’s popular clone drama.

“In a way, I feel very close to ‘Orphan Black’ since I got to work with a piece of that puzzle,” Rose said. “I’m totally excited for Tatiana and all that she gets to do. It’s an actor’s dream to get this all-you-can-eat-buffet of all these characters and for producers not to pigeon-hole you into one character.”

As for how exactly she’s now more than one character, it’s still a mystery. Even the characters were perplexed by how exactly Mara and Audrey split into two bodies, but Rose promises answers soon.

“Very, very soon. I would say in the next few episodes,” she predicted. “Mara has been in charge for so long, and Audrey is just as keen for answers, just as curious [as the audience]. That’s one of the things I’ve loved about playing her, the audience sees a lot of what’s going on through her eyes. So all of our grappling, all of our longing for her to come back and for answers, all of those things are what Audrey is going through too.”