October 2015 was the worst box office performance in 15 years. And the last two weekends debuted no fewer than seven movies that flopped — most of which relied on movie stars.

The total grosses for October were $432.5 million, the lowest for the month since 2000, when “Meet the Parents” led an otherwise modest $432.2 million. And two of the five worst wide-release openings of all time launched last month: “Jem and the Holograms” at No. 4 and Murray’s “Rock the Kasbah” at No. 5.

Worse, 2015 was the rare October boasting five weekends — which should have boosted overall box office instead of diminished it.

Matt Damon and Jack Black were the exceptions. Fox’s “The Martian,” with Damon as an astronaut stranded on Mars, was the month’s top-grosser with $183 million. Black’s horror comedy “Goosebumps” was a distant second with $57 million for Sony.

Jackman’s $150 million “Pan” for Warner Bros. and Diesel’s $80 million “The Last Witch Hunter” for Lionsgate were the biggest misfires. The toll went beyond the bottom line, however.

Cooper and Bullock have proven their box-office mettle and will still be able to pay the rent, but these were the worst wide openings of their careers — and don’t help their brands.

Bullock’s limp $3.4 million debut with “Our Brand Is Crisis” broke a winning streak that included voice work on the billion-dollar kids hits “Minions,” and scores with “Gravity” and “The Heat” in 2013.

Bullock took the role in the R-rated political comedy in part to show that a woman could handle a role designed for man, in this case George Clooney, whose Smokehouse Productions produced the film.

“They can both still open a movie,” Phil Contrino, senior analyst at BoxOffice.com, told TheWrap. “It’s just a matter of timing. Had these films opened at another time of year, when the market wasn’t quite so crowded with movies for adults, they might have done better.” 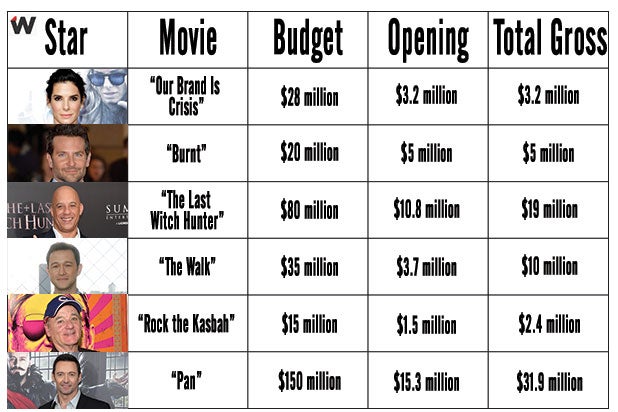 When the “The Last Witch Hunter” bombed, it underscored the difference in box office potential between his franchise films like “Furious 7” and smaller films in which he’s the lead.

Nobody’s blaming Jackman for the flop of “Pan,” a stylized origin story based on the classic kids tale that in retrospect seems ill-conceived, at least with that budget. That could be because he was nearly unrecognizable as the hirsute villain Blackbeard.

And when Gordon-Levitt’s tightrope tale “The Walk” tanked for Sony in its wide debut after an IMAX run that failed to gain traction, it probably took the Oscar hopes of the Robert Zemeckis‘ real-life drama with it. (The film did score 85 percent on Rotten Tomatoes.)

“Rock the Kasbah,” the comedy starring Murray as an over-the-hill rock manager in Afghanistan, felt dated from the outset and its $1.5 million debut for Open Road Films.

So other than reinforcing the reality that it is story — particularly familiar source material like comic books — that drives today’s box office more than movie stars, what do all the falling stars mean in the big picture for Hollywood?

“Not that much,” Contrino said. “The market had to catch its breath. A lot of people knew they were going to go see ‘Spectre’ or ‘Peanuts’ this coming weekend, and that had to influence their decision this past weekend.”

Still, despite the dead October, the year remains on pace to be the best ever at the domestic box office with the James Bond film “Spectre” opening Friday against “The Peanuts Movie.” The end of this month brings both Pixar’s “The Good Dinosaur” and “The Hunger Games: Mockingjay — Part 2.” And in December, the box-office behemoth “Star Wars: The Force Awakens” still awaits.