Kick the tires and light the fires – “Top Gun 2” has arrived. After years of development and then release date delays, “Top Gun: Maverick” is finally out, fulfilling a long-promised dream from Tom Cruise who was determined to reprise the character that catapulted him to superstardom. The late Tony Scott sadly is not in the director’s chair this time around, but Cruise is working with some familiar faces – his “Oblivion” filmmaker Joseph Kosinski directs, while his “Mission: Impossible” and “Jack Reacher” cohort Christopher McQuarrie is co-writer and producer.

The sequel is racking up some incredibly positive reviews and is on track for a massive box office weekend, but what exactly are the viewing options? Here’s how to watch “Top Gun: Maverick” 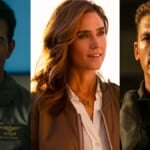 Is “Top Gun: Maverick” in Theaters or Streaming?

“Top Gun: Maverick” was released exclusively in theaters – including Imax theaters – on May 27. As of release date, it is not available to watch on streaming or via any other at-home devices. If you want to watch the sequel ASAP, you’ll need to go to a movie theater.

When Will “Top Gun: Maverick” Be Streaming on Paramount+?

It’s a good question, and one not easily answered. While recent Paramount Pictures releases like “Sonic the Hedgehog 2” and “Scream” have been streaming on Paramount+ 45 days after they initially hit theaters, Cruise has been pushing to make an exception for “Top Gun: Maverick.” The actor and producer is aiming for a lengthy theatrical window, and Paramount has agreed to keep the film exclusively in theaters longer than 45 days.

So the long and short of it is: if Tom Cruise has his way, “Top Gun: Maverick” won’t be streaming anytime soon.

What Is “Top Gun: Maverick” About?

The sequel picks up in real-time, decades after the events of the first film in which Cruise’s Maverick is enlisted to train a new group of young pilots. Ever the hot shot, Maverick still ruffles plenty of feathers, and rubs shoulders with some familiar faces from back in the day.

Tom Cruise and Val Kilmer return as Maverick and Iceman, while Jennifer Connelly plays an old flame from Maverick’s past.

Where Is “Top Gun” Streaming?

You can stream the original “Top Gun” on Netflix and Paramount+.