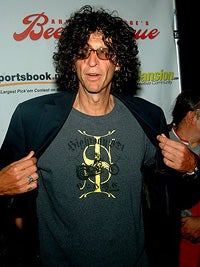 Howard Stern told his satellite radio listeners on Monday that he is considering leaving Sirius – and radio altogether — to become a judge on “American Idol.”

Stern confirmed a report that Fox is interested in hiring the Sirius shock jock to replace Simon Cowell on the reality show.

“There’s not a better job on the planet than judging that f—ing karaoke contest,” Stern said.

Stern’s five-year, $500 million contract with Sirius expires at the end of the year.

Responding to a television report speculating Fox would have to match his current annual salary, Stern replied: “A $100 million to judge a karaoke contest? Yeah, I would do that show for $100 million.”

Stern said he would not do a radio show if he got the “Idol” gig. (Which makes me think that this, too, is pure posturing in a contract year.)

"If I do say so myself, I can't imagine anyone else but me replacing (Cowell),” Stern said. “I mean, I don't know. How else are they going to make that show work? Who knows how to broadcast and who knows how to be interesting? And who's not afraid to speak their mind?"

One hitch in the Stern-to-“Idol” scenario would be the King of All Media’s fear of flying. Stern said he turned down an opportunity to appear as a guest on “Tonight Show” during Conan O’Brien’s last week because he didn’t want to fly to Los Angeles.

On Monday, Stern said his fear would not prevent him from taking the “Idol” gig, despite the disparate auditions.

“It would be the best thing that happened to me,” he said. “What a cush job — $100 million for four months. Who wouldn’t take that?”

By the end of the show, however, Stern jokingly offered what he might say as a judge — the kind of offensive material that's made him a legendary shock jock but would all but kill the chance of Fox hiring him:

And his comments about Ellen DeGeneres and Randy Jackson were so offensive, I'd feel weird repeating them here.