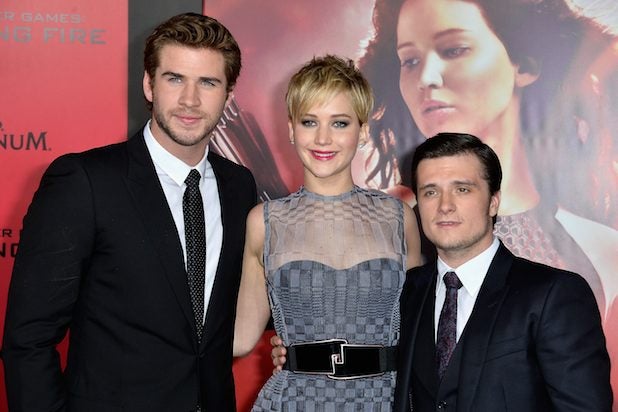 Jennifer Lawrence, Liam Hemsworth and Josh Hutcherson are the three biggest young stars to emerge from Lionsgate’s “Hunger Games” franchise, and with two more installments on the way after “Catching Fire” hits theaters on Friday, their careers are showing no signs of slowing down.

Lawrence, the busiest of the bunch, will follow up her second portrayal of “Hunger Games” heroine Katniss Everdeen with a dramatic performance in Sony’s Dec. 18 release, “American Hustle” — her second collaboration with “Silver Linings Playbook” director David O. Russell. The  Oscar-winning actress portrays the young wife of a con man (Christian Bale) who gets roped into an FBI sting operation designed to take down the mayor of  Camden, New Jersey.

While “Catching Fire” is expected to be one of the biggest box office hits of the year, Lawrence will have another crack at breaking records in May when “X-Men Days of Future Past” hits theaters. The seventh installment of 20th Century Fox’s “X-Men” franchise features mutants from cinematic universe director Bryan Singer started in 2000, as well as the younger faces Matthew Vaughn cast in 2011’s “X-Men: First Class.” Lawrence is returning as blue shapeshifter Mystique.

Although Lawrence had to turn down a role in Peter and Bobby Farrelly’s upcoming “Dumb and Dumber” sequel due to her “Hunger Games: Mockingjay” production schedule, the actress did have time to film a quick cameo. The 23 year old will be seen as the younger version of Kathleen Turner’s character when “Dumb and Dumber To” hits theaters on Nov. 14.

“Serena,” Lawrence’s third project alongside Bradley Cooper, is awaiting a U.S. release date. The Depression-era drama follows a couple’s struggles to build a timber empire, which is threatened by the wife’s inability to bear children.

Projects on her horizon include two with “Hunger Games” director Gary Ross. Lawrence is set to star in his adaptation of John Steinbeck’s seminal 1952 novel “East of Eden,” as well as Ross’ adaptation of Hannah Kent’s “Burial Rites.” Lawrence is also attached to star in yet another literary adaptation, “The Glass Castle,” which Destin Daniel Cretton (“Short Term 12”) will direct.

Hemsworth, who is about to knock older brother Chris “Thor” Hemsworth out of the top spot at the box office when “Catching Fire” makes upwards of $150 million this weekend, has a few roles he can look forward to outside of playing Katniss’ crush Gale.

2013 release “Paranoia” didn’t do much for Hemsworth, or distributor Relativity Media, but that’s not stopping the company from trusting him to take the lead in action film “Aurora Rising.” Hemsworth will play a surfer turned military fighter pilot who, after acing a complicated and messy first combat mission, gets recruited to be part of an elite team to test the next generation of aircrafts just as an international conflict begins to escalate.

Hemsworth will also join Teresa Palmer, John Malkovich, Bruce Dern and Billy Bob Thornton in “Cut Bank,” a 2014 thriller about a young man trying to escape the small town in Montana where he grew up, only to be met with a flood of bad karma when he moves to a bigger city.

Hutcherson, who plays Hunger Games victor Peeta in the blockbuster franchise, will next be seen in “Paradise Lost,” a 2014 drama in which he stars as a surfer who meets the girl of his dreams in Colombia — then meets her uncle, Pablo Escobar (Benicio Del Toro).

Last May, Hutcherson’s production company, JetLag Productions, announced he will star in and produce “Ape.” Directed by Miguel Sapochnik (“Repo Men”), the dark psychological thriller focuses on a young man’s struggle with mental illness, love and a deep-rooted family secret.