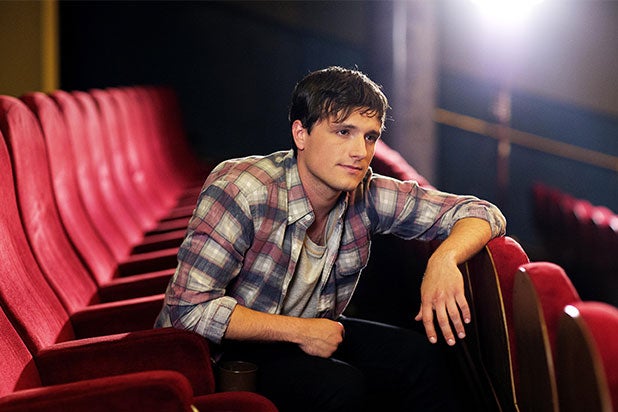 Josh Hutcherson has a lot of projects coming up, including the last installment of the “Hunger Games” films and James Franco‘s “The Long Home,” but wants nothing more than to star in one particular franchise.

“I want to be in ‘Star Wars’ so  bad!” Hutcherson told TheWrap in an interview while promoting his new short, “The Rusted.”

As for which character he’d like to play, “Luke Skywalker is the obvious choice.”

Hutcherson currently has his hands full with three completed movies, one announced film (“Journey 3”), his own production company — where he plans to try his luck with directing — and Thursday’s premiere of “The Rusted,” directed by Kat Candler and co-starring “Hunger Games” alum Jena Malone.

The 15-minute short tells the story of a brother and sister who begin renovating their childhood home into a recording studio, when strange happenings force them to face memories of the past.

The film is based on a trailer submitted into Ron Howard and Canon’s “Project Imagination: The Trailer” contest, which accepted submissions from all over the world. Hutcherson and Howard selected “Tainted Water,” created by Mark Mukherje, a college student from South Florida, as the winner.

While promoting the short film, Hutcherson spoke to TheWrap about “Mockingjay – Part 2” marking the end of an era, what it was like working with James Franco on two movies and which presidential contender he thinks would win the 76th Hunger Games.

TheWrap: How is “The Rusted” different from everything you’ve done before, and from your other upcoming projects?
Josh Hutcherson: It’s very different, it was a great character and it was really new for me. The character is really angry and had a hard past, but it felt very real even though it was a supernatural story as well. It was a well-written script, but it was kind of hard to have 15 minutes to convey the whole story of a character.

How was it working with Ron Howard?
Ron is such a nice guy and just sitting down and talking to him about movies was amazing — one of the best directors alive and I get to discuss film — pretty much a dream come true. He was really easy to work with, really collaborative, and really supportive of the whole project.

You have a lot of other projects coming up. “Hunger Games: Mockingjay – Part 2,” for example, which marks the end of an era. How do you feel about that?
It feels good, I mean, it’s sad that it’s coming to an end. I loved these movies and clearly I work with a bunch of assholes, we love each other so much. But it’s time. It’s nice to have my freedom again to take on any new projects I want. Every year, we were committed to making a movie and three plus weeks of press in the fall. So for four years, I couldn’t work on a project in the fall time or when we were filming.

What about your blip on “Conan” where you accidentally said there might be another “Hunger Games?”
Yeah, I’m just trying to stir up stuff. I’m proud of that moment.

You are working on “The Long Home” and “In Dubious Battle,” both directed by James Franco. How did you come to work with him on two films?
“In Dubious Battle” was a really powerful script. There aren’t many opportunities where I get to push myself in a different direction, and I loved it. James gave me the opportunity with that role. And after doing that, he wanted me to do “The Long Home,” which is a much bigger character, and again got me to go in a different direction and be a part of a unique original story … It’s great working with him, he’s insane, he’s constantly doing a million projects. He’s really creative, talented, and gives you lot of freedom as an actor.

You went from playing the same character for four years to playing three different ones within a year. How was that transition for you?
It is strange to be changing characters when I haven’t been for so long. It’s exciting, but that’s what I want to do. You have to make sure you are not doing the same thing over and over again like I was doing with the “Hunger Games.” It’s really refreshing that I get to go on the set and play a different character each time as opposed to the past four years of being the same guy.

So you can’t see yourself hopping into another franchise?
If a great one came along, I wouldn’t put it down. For the time being, there’s nothing on the horizon that is franchise-ish in any way.

Is there any franchise that you would love to be a part of?
“Star Wars.” I want to be in “Star Wars” so bad! Luke Skywalker is the obvious choice — I would love to get a chance. I want to have a lightsaber fight!

Do you have anything else lined up after “The Long Home?”
“Journey 3” isn’t totally real, they have a script but they don’t have any plans to actually shoot that any time soon. If it happens, it won’t happen for a while. I actually have a production company that I’ve been working a lot on, we have about seven projects currently in development. And also start my journey to directing.

What’s your dream movie that you would like to direct?
I like creating original stories and I like psychological cerebral thrillers like “Fight Club” and “Donnie Darko.” That really kind of dark thing, I’m attracted to that. They’ve been my favorite movies my whole life.”

Do you follow the election? If so, who would win the “Hunger Games?”
I think Jim Webb, I think he would win because he is ex-military, he’s a Vietnam vet, a kicking ass machine. Although I think Bernie Sanders would find a way to end it all. Sanders’ weapon of choice would be a megaphone because he can do the most damage with that, that’s what he is so smart about. And Jim Webb would just want an assault rifle. He’s an ex-Marine, maybe just his bare hands! I don’t know. But he needs a weapon.