An Army sergeant has filed a multimillion dollar lawsuit against the makers of Oscar-nominated film "The Hurt Locker" just days before the Academy Awards ceremony, claiming the central character in the film is based on him.
The suit was filed late Tuesday in federal court in New Jersey. 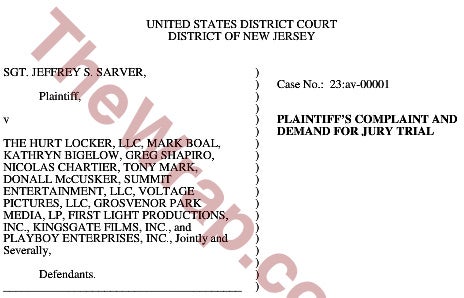 In the suit, Master Sergeant Jeffrey S. Sarver said he believes screenwriter and producer Mark Boal based the film’s main character, a cocky and reckless army sergeant, almost entirely on him.(Click here for the full complaint).
Sarver’s suit characterizes the critically acclaimed film as "… nothing more than the exploitation of a real life honorable, courageous, and long serving member of our country’s armed forces, by greedy, multi-billion dollar ‘entertainment’ corporations."
The suit also alleges that Boal, as part of an armed services press program embedded in Master Sgt. Sarver’s unit, used personal details from the soldier’s life in an embarrassing way.
Among those named as defendants are director Kathryn Bigelow, screenwriter Mark Boal, and the film’s distributor Summit Entertainment and producer Voltage Pictures. Playboy, the magazine that Boal was working for when he wrote the story about a bomb squad in Iraq that later inspired the film, is also named in the suit. 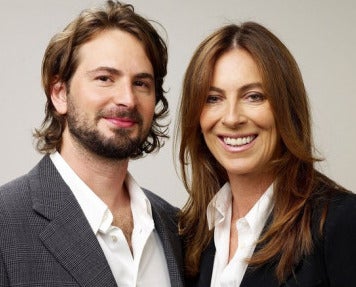 Sarver’s suit alleges that "virtually all of the situations portrayed in the film" were based on Sgt. Sarver experiences and had been observed and documented by Boal, while the journalist was on assignment for Playboy.
The complaint alleges six counts, including misappropriation of name and likeness; invasion of privacy; breach of contract; infliction of emotional distress; fraud; and negligent misrepresentation.
Those claims are made, in part, on the grounds that numerous similarities between the character William James and Sarver depicted the soldier in a false light, and that Boal violated Defense Department “ground rules” for embedded reporters, which plainly state that only soldiers’ names and hometowns – no personal information – may be used in their reporting.
According to the suit, even the film’s title is derived from a phrase that Sgt. Sarver coined. Boal maintains that "hurt locker" is in fact a commonly used expression among military personnel.
Despite the multimillion nature of the suit and the awards attention that "The Hurt Locker" has attracted, the film has not made much money at the box-office. It is one of the lowest grossing Best Picture Oscar nominees this year, netting less than $15 million at the domestic box office.
Boal referred calls for comment to his lawyer and Bigelow declined to comment for this story. Boal, however, did tell the Los Angeles Times yesterday that he did not attempt to buy the rights to Sarver’s story because he wanted the freedom to fictionalize the experiences of other bomb defusing experts and soliders he met while embedded for Playboy instead of focusing exclusively on Sarver.
"There are similarities, because you’d find similarities to events that happened to lots of these guys,"  Boal told the Times.  "But the screenplay is not about him. I talked to easily over 100 soldiers during my research and reshuffled everything I learned in a way that would be authentic, but would also make for a dramatic story."
Summit, which released the critically-lauded film, issued this statement on Tuesday:
"We have no doubt that Master Sergeant Sarver served his country with honor and commitment risking his life for a greater good, but we distributed the film based on a fictional screenplay written by Mark Boal," Summit said.
Geoffrey Fieger, the Michigan lawyer representing Sarver, has handled a number of high-profile cases over the years, including a defense of Dr. Jack Kevorkian and the family of Scott Amedure, "The Jenny Jones Show" guest who was shot just days after appearing on the program.
"The Hurt Locker" is considered a leading awards contender at the Sunday’s Academy Awards. It has been nominated for 9 Oscars including best picture, director, and screenwriter.
These last weeks, however, have been tough ones for the putative front runner. In addition to Sarver’s suit, the film’s producer Nicholas Chartier was barred from attending Sunday’s show over a series of controversial emails he sent to Academy voters.
Read also: "New Complaint: ‘Hurt Locker’ Is Too Factual"