The two sides of Adam Sandler — buffoon mogul of lowest-common-denominator comedies, gifted actor for serious filmmakers — are making an attempt to bridge the gap with the basketball saga “Hustle.”

Though it’s a Happy Madison for Netflix production (where Sandler has lucratively parked his shingle for years), it’s also an attempt to capture some of the dramatically richer, indie sensibility of his why-hasn’t-he-been-nominated-for-an-Oscar-yet turns in fare like “Uncut Gems” and “The Meyerowitz Stories.”

The result, as directed by the promising Jeremiah Zagar (“We The Animals”), is an agreeable combination drill of humor, hurt, on-court action and redemptive uplift that’s closer to simply being a solidly inspiring sports movie than anything notably representative of the Sandler oeuvre. 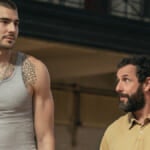 At the very least, his character is one of the more appealing smart-asses he’s commandeered for his middle-aged self: Stanley Sugarman, a cynical, unappreciated husband, father, and Philadelphia 76ers scout, who puts his reputation on the line for a tough but thin-skinned Spanish street baller.

A once promising college player with a scar on his hand indicating a bad end to that career, Stanley toils alone touring arenas around the world for the savvy owner (Robert Duvall) who understands him and the churlish owner’s son (Ben Foster) who doesn’t. Trying to find the next Dr. J (#1 on this authenticity-driven movie’s long roster of cameos) when your life feels halted isn’t easy, and neither is the constant time away from his ex-athlete wife Teresa (Queen Latifah) — who supports his ambition to transition into coaching — and teenage daughter (Jordan Hull, “The L Word: Generation Q”), who’s eyeing film school. His high-powered sports agent friend Leon (Kenny Smith) suggests Stanley join his roster, but the scout’s need to be in the thick of the game itself is too great. 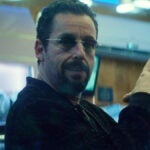 In Mallorca, however, the juices start flowing when he happens upon a nighttime public-court face-off between locals, and the cash-pocketing star is a lanky, fast, and agile defender in construction boots who appears unfazed by the noise, drama, and aggression around him. Bo Cruz (NBA-er Juancho Hernangómez, making his rookie film debut) lives with his single mother (Maria Botto, “Good Behavior”) and young daughter (Ainhoa Pillet) and is initially suspicious of this awkward stranger’s excitement at his potential –until the minimum dollar figure mentioned for an NBA rookie seals the deal for a 22-year-old laborer supporting three people, and he’s on the plane back to Philly with Stanley to get him in shape for the draft.

Needless to say, there are obstacles to this ticket-out/stepping-stone/surrogate-father matchup, starting with Bo’s troubled past and Stanley’s troubled present, which are followed by enjoyably shrewd workarounds that get our heroes closer to their destiny. But as presented in the screenplay by Taylor Materne and Will Fetters (“A Star Is Born” 2018), and boosted by Sandler’s steady stream of colorful taunts and self-deprecating wisecracks, these story beats feel suitably realistic to the way professional basketball works in the nurturing of players, the pressures placed on them, and the management of their talent and image. 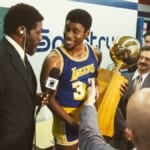 It’s the rare sports movie that refreshes the expected training montages and on-court sequences. This is where Zagar’s hiring — beyond his being a Philly native, and evoking plenty of location vibrancy — pays dividends, with his and cinematographer Zak Mulligan’s visually fleet, rhythmic treatment of athletic movement, shot-making, and competitive flare-ups carrying the same immersive punch as his depiction of childlike freedom in “We the Animals.” It helps, too, that real hoopsters like Anthony Edwards (as a trash-talking antagonist named Kermit), Boban Marjanovic, Seth Curry, and countless other professionals on and off the court are in the bit, larger-than-bit, and window-dressing roles. Not that “Hustle” was ever going to feel like a documentary, but that breezy, NBA-sanctioned verisimilitude (including its R rating for how guys in sports talk) goes a long way toward bolstering a mostly standard-issue underdog narrative.

Sandler, sporting a perfectly downbeat undergrowth of beard, proves once more how comfortable he is mixing hangdog sweetness and motormouth nervousness, pulling the occasionally stiff Hernangómez toward a reliable portrait of hotshot naïveté that by the end evokes genuine warmth, and even making a marriage to Queen Latifah (underused but charismatic) seem like more than a skit idea.

Foster, unsurprisingly, has no problem getting us to despise him, and it’s a further sign we’re in uncharted Happy Madison waters that his comeuppance doesn’t involve bodily fluids or sexual humiliation. In fact, it’s not even a thing, as if to drive home that the trajectory of “Hustle” is focused on how satisfying the rewards of hard work, affection, and cohesion are, not what happens to doubters and naysayers.

The ending is particularly satisfying, too, in how it studiously avoids the tyranny of game-clock suspense for the richer reveal of what friendly competition in an emotional sport should look like. Smoothly predictable but fortified with good feels, “Hustle” may be a more polished than “Uncut” stone, but in the pantheon of Sandler’s sports-themed efforts, let’s hope he continues evolving from his minor-league comedy boorishness.