“Really loved it — it’s been a lifelong love of mine, the German language,” Stevens told TheWrap’s Beatrice Verhoeven in a virtual interview during the Toronto International Film Festival. “I did a movie there about 12 or 13 years ago playing an Englishman who spoke German, so a little bit different to this one.”

He added: “It was nice to dust off the German and use it in this way.” 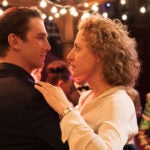 In “I’m Your Man,” Stevens plays a humanoid robot designed to be the perfect man for Alma (Maren Eggert), who is taking part in the humanoid experiment to obtain research funds for her studies. The entire film, directed by Maria Schrader, is in German. Schrader co-wrote the script with Jan Schomburg, based on a short story by Emma Braslavksy.

Stevens also said that everyone on set of the “strange, sweet, weird” film spoke German — until the very last day when shooting wrapped and everyone praised the actor in English.

“Suddenly, everyone was like, that was fantastic, congratulations, and I was like, ‘wait, you all speak English?'” Stevens said. “They all spoke perfect English.” 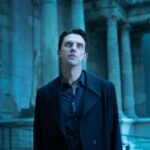 “I’m Your Man” premiered at the Berlin Film Festival in March and is now at TIFF.