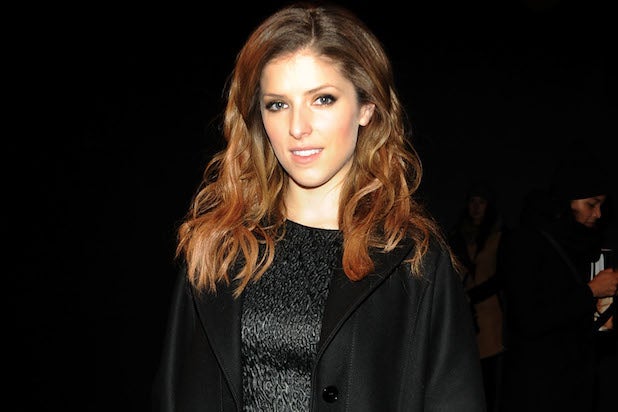 Anna Kendrick was all smiles as a small, urgent flurry of flashbulbs popped before her, and she was quite genuinely happy to be reunited with the creative team from her upcoming film, an adaptation of the Off-Broadway musical “The Last Five Years.” But, the straight shooter that she is, Kendrick was also blunt about her recent run of musical films — and her desire to give her vocal chords a break.

“I never want to sing again, honestly. It’s hard as f-ck,” the actress, who starred on Broadway as a 12-year-old, admitted to TheWrap at a distributor screening of her film at Lincoln Center on Monday night. “The ‘Pitch Perfect’ [sequel] is going to be fine, ten girls have to be able to sing the songs so it’s going to be fine, but doing ‘The Last Five Years’ and then ‘Into the Woods’ straight away, I was like, I don’t want to have to think about my voice so much. I want to be able to drink beer whenever I want.”

If she sticks to that plan, Kendrick should go out with good marks for her last two musical performances. In “The Last Five Years,” Kendrick plays opposite Jeremy Jordan (“Newsies”) in writer-director Richard LaGravenese‘s adaptation of Jason Robert Brown‘s critically acclaimed, if little-seen musical, which played Off-Broadway in 2002 and won a Drama Desk award.

“Years” is a non-linear story that follows the phases of a young couple’s doomed relationship like a double-ended stick of dynamite burning inward, with the blissful early days of their love colliding with a flame that begins at their separation. Jealousy, arrogance and infidelity tear Cathy (a struggling actress) and Jamie (a rising novelist) apart, marking it as an important beginning in millennial pop culture’s exploration of divorce. The film holds on to the stage musical’s trading of colliding timelines, but unlike the original production, which alternated solos, this version features both actors in nearly every scene.

“In a lot of ways I think it becomes an even more abstract experience, which, perversely, allows it to be a little bit more of an emotional experience,” said Brown, who admitted that he didn’t initially see “Five Years” as his most likely-to-be-adapated work. “You’re not trying to figure out where you are, you’re just watching scenes from this life. It is in the best possible way, a very disorienting movie.”

One can understand Kendrick’s reticence to dive back into musicals, too, because not only was she featured in a great bulk of the scenes, the entire thing was musicalized, so any and all dialogue was at least given a sing-song tune, if not flat out belted. It was shot in 21 days throughout New York on a shoestring budget — LaGravenese called it “Monopoly money,” praising the location manager for getting them an entire Brownstone — and all the singing was done live, which added both creative freedom and vocal stress.

“You don’t have to worry about lip syncing, because that’s the hardest thing to do,” Jordan, who mostly dubbed his singing while starring on “Smash” and in the film “Joyful Noise,” told TheWrap. “On ‘Smash,’ they were like, ‘Your lips… are you singing?’ And I was like, ‘Yes, I’m singing along!'”

No such problems here.

“This we did almost all live, because you have to, because the entire story is told through song. You either do that, or have a week of rehearsal and record it and then you’re stuck with these choices and you film it and you can’t even explore it and try new things. Because you’ve already done this one way of singing it, you can’t sing it another way, and that might have turned out great, but this gave us so much freedom.”

Jordan is best known for his Tony-nominated run on “Newsies,” which has put him firmly entrenched in the Broadway community. With that experience under his belt, he plans on breaking into more straightforward acting — he’s going out for several comedy pilots this season — and working with Kendrick was immensely helpful to his progress.

“Just getting to watch an Academy-worthy film actress was incredibly eye-opening, with her subtlety and her humor,” he explained. “It’s funny, you see these actors on the screen and they’re doing so many wonderful things, but you watch her and it seems like she’s doing nothing and it’s all happening internally. But then you see on the screen, holy shit! This is totally perfect. So I definitely learned a lot from her.”

Perhaps they’ll do another project together, whether it has singing or not.

“Honestly, after ‘Pitch Perfect,’ I wouldn’t have ever wanted to do a musical,” Kendrick said. “I would have intentionally tried not to do a musical, but when it’s ‘The Last Five Years’ and ‘Into the Woods’ [in which she plays Cinderella, crown and all], you can’t really say no.”