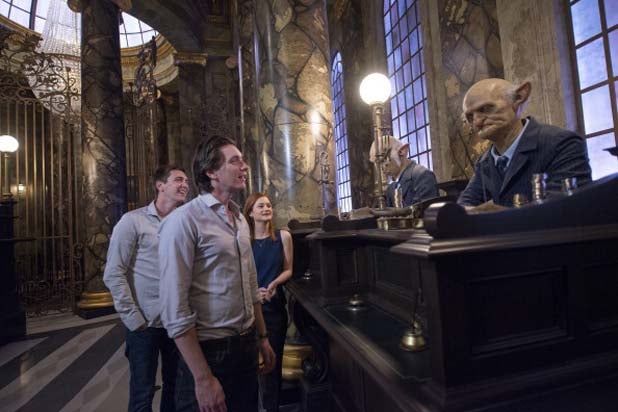 You will soon be able to visit Hogwarts in Osaka, travel to the “Ice Age” in Kuala Lumpur and hang out with Shrek in Moscow. Taking over international multiplexes is not enough for Hollywood; it wants to dominate public amusement across the globe, too.

And so, construction of theme parks, resorts and other attractions based on movie characters has accelerated to a blistering pace in the past few years, with much more on the way.

>> Fox has licensed its characters for a theme park in Malaysia, and plans to announce similar ventures in China and potentially Brazil, according to Jeffrey Godsick, Fox’s president of consumer products.

>> Warner Bros. will launch a “Wizarding World of Harry Potter” attraction at Universal Studios Osaka in Japan next month to complement its attraction in Orlando.

>> DreamWorks Animation is working on an entertainment center in Shanghai. It’s also in the midst of launching indoor theme parks in Moscow, St. Petersburg and Yekaterinburg with attractions based on movies such as “Shrek,” “Madagascar” and “How to Train Your Dragon.”

>> Disney, by far the world wide leader in the theme park business, is building a theme park in Shanghai, its first park in mainland China.

>> Even Lionsgate is getting in on the action with a traveling “Hunger Games” tour next summer — which the Young Adult franchise experts hope will lead to a bigger theme park.

“With the growth of emerging markets around the world, and the growth of the middle class in general, there’s much more of an appetite in a lot of countries outside the U.S. for theme parks,” Godsick told TheWrap, describing these parks as a “necessity.”

Studios have conceived the vast majority of their new theme parks for international markets, where there’s greater growth potential.

That is due in part to saturation in the United States, which already boasts major parks in every corner of the country. You can go ride “Pirates of the Caribbean” at Disneyland, get drenched in “Jurassic Park” at Universal Studios Hollywood and ride “Superman” at Six Flags Magic Mountain — all without leaving Southern California.

Universal pursued a “Harry Potter” attraction because a property with such a large fan base could alter the competitive landscape in Florida. Warner Bros. decided a that could only benefit its maturing franchise.

“The movies were eventually going to run their course in terms of the books,” Brad Globe, president of consumer products at Warner Bros., told TheWrap. “Universal had expressed previous interest in a ‘Harry Potter’ relationship, and we felt it would be a positive thing for the brand.”

Yet movie studios also sense an opportunity (and a need) to court the growing audience beyond our borders. The most successful movies earn at least 60 percent of their grosses overseas, and that figure is even higher for most sequels.

A recent PricewaterhouseCoopers report projected the global box office will grow more than $9 billion over the next five years, and the vast majority of that will not come from inside the United States.

Theme parks and other attractions strengthen the brands of characters like “Kung Fu Panda” and “Shrek” in emerging markets, extending their lives well beyond any theatrical expiration date.

“Too often we’ve turned off the light when a film has exited the theater,” Michael Francis, chief global brand officer at DreamWorks Animation told TheWrap. “We have an opportunity to build further connections by thoughtfully integrating those characters into exciting experiences around the globe.”

Also read: ‘How to Train Your Dragon 2’ Tracking to Breathe Box-Office Fire

Fox’s Godsick added that the company had successfully continued the stories behind franchises — such as “Buffy the Vampire Slayer,” “The X-Files,” and “Planet of the Apes” — in publishing and merchandise, and sees the theme parks as an extension of that plan.

DreamWorks Animation hired Francis from Target a year and a half ago at a time the company needed to diversify and establish revenue streams beyond its core film business. Because it only releases a couple of movies a year, each of those movies must keep generating profit years into the future to sustain what remains a relatively small, though ambitious, public company.

DreamWorks Animation is now working on ten times as many initiatives as it was just a couple of years ago, and the upcoming release of “How to Train Your Dragon 2” will be “one of the largest consumer products initiatives in the history of DreamWorks,” according to Francis. He has partnered with more than 75 retailers.

“Dragon” also factors into the plans for attractions in several parks and resorts, including those in Russia.

With the exception of the Dream Center in Shanghai, DreamWorks Animation does not build its theme parks. It licenses its properties, like other studios entering the global attractions business. Fox will contribute to the creative development of the various rides and attractions, but it will not own its park in Malaysia; it is part of a much larger resort destination, and will stand on the ground where another park once existed.

This separates them from Universal and Disney, who possess an array of properties across the globe. Theme parks and resorts generated $14 billion in revenue for Disney last year, more than double what its film studio made. Universal reported theme park revenue of $2.2 billion from Universal Studios Hollywood and Orlando last year, but does not own international parks.

Other studios consider these attractions a part of their consumer products business. Ticket sales at a park are secondary. Theme parks help movie studios market sequels and sell DVDs, toys and video games.

“Anything you can do to get characters and franchises in front of those consumers will help box office sales and ticket sales going forward,” Eric Wold, an analyst who covers Lionsgate and DreamWorks Animation for B. Riley & Co., told TheWrap.

Theme parks deepen relationships between movie studios, local investors and foreign governments. That is important in emerging markets such as Brazil, where Fox is looking at a project and Warner Bros. has already licensed characters to theme parks, as well as Russia, where DreamWorks Animation has announced a raft of plans.

Nowhere will those relationships be more vital than China, the second largest film market in the world, and a notoriously difficult place to do business.

Nothing gets done in China unless you have a relationship with the government, or someone in a position of power. Movie studios spend years debating strategy for the market, and forging ties with the people that can help them implement it. Universal and Warner Bros. are both in the market for executives to steer their business there.

“You need to be in a place where you can guarantee certain assurances, especially in the area of safety and quality are met,” Godsick said. “That’s of paramount importance. Number one is safety and quality and we will never do anything to sway from that in any way. So you have to have very strict rules and criteria, both in your deal and who you’re going to work with.”

Wold argued local partners will help film studios accomplish more than building theme parks. They may help them get a bigger cut of the revenue from their movies produced in China. Despite the massive growth of the Chinese market, extracting that new money remains a massive challenge.

Chinese investors stand to make a fortune from these theme parks because the government charges almost nothing for the land, according to executives who have spoken with interested investors. The investors buy enough to construct a theme park as well as a commercial area around it. The value of the land surrounding the park soars given its proximity to the park, thus enriching the investors (provided they actually build a commercial area).

The studios, meanwhile, spend little money of their own to reap profits now and in the future.

“These involve zero capital from studios; their capital is the use of characters,” Wold said. “Theme parks can be a business onto themselves, but the core rationale is to drive awareness of the franchises and brands — not just theatrically, but home video, consumer products and all those business based on the core franchises.

“Ticket sales from the ‘Shrek’ theme park are gravy on top.”