If you’re going to take on Seth MacFarlane, it’s definitely better to do it when he’s halfway into a generous glass of bourbon and enjoying a post-Emmy smoke at the HBO party.

That’s where I found him on Sunday, loitering at the entrance to the party at the Pacific Design Center, and for some reason obsessing over the size of New York Times movie critic A.O. Scott.

I mean the literal, physical size of the critic. MacFarlane insisted that Scott is obese. I insisted that he was wrong and asked for 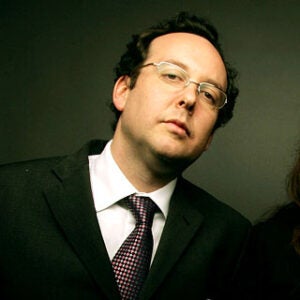 stakes, and a bet. (This was not high risk on my part, I know Tony Scott, having worked at the Times. He is not obese (pictured, left).

Pause here. This is not all that happened on Emmy night, to be sure. It was a rollicking show with several surprises, including Stephen Colbert finally getting his Emmy due over his frival Jon Stewart, Kerry Washington not getting hers and Aaron Paul’s upset loss to Bobby Cannavale in drama.

There was plenty in the air at the Governor’s Ball, where there were living sculptures of women in powdered white costumes and an all-girl band on the revolving podium.

Zachary Quinto was hanging out, looking mellow. He didn’t win but didn’t seem to mind. He’s on his way to New York for a long run on Broadway in “The Glass Menagerie,” slightly heavier fare than “Star Trek.”

John Hodgman, with an impressive handlebar moustache, stopped to give a bear hug to Stephen Colbert and his jubilant crew.

Meanwhile, the sprawling HBO do at the Pacific Design Center was a Who’s Who of Hollywood and celebrities.

Tony Hale, a surprise winner for “Veep,” was running around the party showing a delightful video of his seven-year-old daughter jumping for joy at the news of her Dad’s win for best supporting actor in a comedy.

He said Julia Louis-Dreyfus had called him on Sunday morning and suggested that if she won, he hold her purse during her speech and do a bit as her handler, Gary Walsh. “We weren’t sure it was going to work,” he said.  It was probably the funniest moment of the Emmys.

Jeff Daniels, who won best actor in a drama series for “The Newsroom,” had a long line of well wishers. He explained the gum-chewing during his acceptance speech, like — seriously? “I came thinking it would be Brian (Cranston) or Kevin (Spacey). But when Tony Hale won, I thought, ‘They’re really thinking this year.'”

But he said  he didn’t listen when his wife suggested a few times that he get rid of the gum, then when the winner was announced, all those thoughts flew out of his head. Oh well.

Daniels said his character, Will McAvoy, is not based on Keith Olbermann, despite any obvious similarities. “I made him up,” Daniels said simply.

I also ran into Aaron Sorkin (who really made up Will McAvoy), and he said he was on his way up north to San Francisco to research the new movie (“the fourth” he groaned) he’s writing about Steve Jobs.

So back to MacFarlane, who has just finished shooting “A Million Days to Die in the West,” a live-action Western starring Amanda Seyfried and Charlize Theron. I don’t really know why he has a thing about A.O. Scott, or Tony Scott, as those who know him call him. But he does. Apparently Tony didn’t like “Ted,” and according to Seth, just doesn’t like movies at all.

This is highly debatable. But what is not debatable is Tony’s general size. I insisted Seth pay up, and to his credit, he did. Fifty buckeroos.

So I had something extra-nice to tip the valet. Happy Emmys.