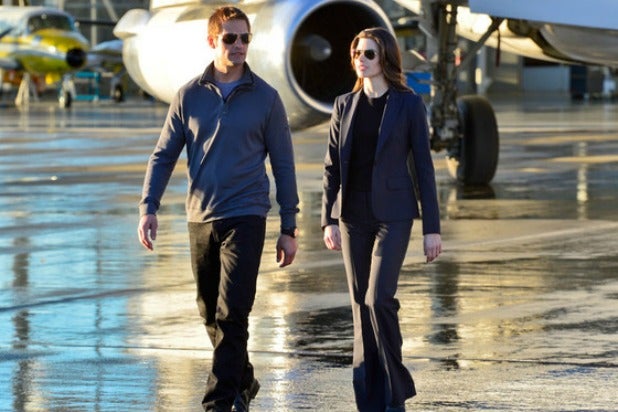 CBS’s new “Intelligence” stars Josh Holloway as a person connected to the Internet at all times — like pretty much all of us.

Holloway plays Gabriel Vaughn, a government agent with a super microchip implanted in his brain that enables him to recreate crime scenes, hack into bad guys’ emails, and unlock doors. The one thing he can’t do, of course, is get a full read on Riley (Meghan Ory) the pretty young operative charged with protecting him. (Will they or won’t they? I don’t care.)

Their boss is played by Marg Helgenberger, who tries to make it all believable by keeping a straight face. But what the show needs is more passion.

The attempt to ground the show in reality feels unnecessary and not fun, because nothing here is all that unbelievable. Unlike the psychic machine at the heart of “Person of Interest,” another CBS procedural starring a beloved “Lost” alum, the device that powers “Intelligence” fails to fire our imaginations — or spark any big-picture questions. (“Person of Interest” at least makes us think about the ethics of fighting “Minority Report”-style future crimes.)

Vaughn is basically just a guy who can Google things really fast and hack into stuff even better than our girlfriend’s genius little brother. His main superpower is that he doesn’t need to do it on his laptop or phone, because his little weapon is implanted right in his head.

It’s kind of like Google Glass without the goofy-looking glasses — and of course it’s quicker, enables its user to process things we mere mortals never could, and can sweet-talk doors, a la R2-D2. The problem is, it’s not that exciting. Think of it as Google Glassy Eyed.

“Intelligence” tries to liven things up with Chinese operatives desperate to get the new technology, questions about who Vaughn can trust, and a mystery about his wife. I know I’m supposed to wonder whether he’ll eventually go for the mysterious Riley, and wonder about her secrets, but it all just felt too telegraphed.

The show also tries to wow us with some frozen-in-time visuals that show us how Vaughn can see the world with his magic microchip. You know when Jean Grey freezes everything in the “X Men” movies? It looks like that.

Can we talk R2-D2 again? One thing that made him so cool was how nonchalantly he did the amazing things he did. He was just cool, in the way Holloway the actor is just cool. Almost everyone in the original “Star Wars” trilogy is cool, with the obvious exceptions of Luke and Threepio.

The golden boy or golden droid, with their respective powers to move objects and translate really fast, were not cool. Golden boys with too many powers tend to be a little annoying. It’s why people prefer the too-human Batman to the powerful alien Superman.

Holloway should not be playing a golden Superman. He was at his coolest on “Lost” as the Han Solo to Matthew Fox‘s Luke. He should be cracking wise and shooting first. He should be flawed and a little scary and fun. Here, he’s saddled with too much power to be cool — and doesn’t even get cool powers in the process. Or the microprocessing.

“Intelligence” premieres at 9/8c on CBS.