The opening of Digital Hollywood, a conference devoted to new technology in the entertainment industry, brought discussions on digital marketing and new platforms, iPads and social gaming, advertising in the digital age and monetizing creativity.

And the event, which takes place Monday through Thursday at the Loew’s Santa Monica Beach Hotel, included a lot of panelists and attendees who used some variation on the phrase, “Well, I talked to my teenage kid about it, and he says …. “

Some glimpses of early action at the conference (at which theWrap is an event sponsor), and at the Variety Entertainment and Technology Summit, which ran concurrently with the opening day of Digital Hollywood:

Besides lobbying for the end of the consent decree, producer, studio exec and Revolution Studios founder Joe Roth spent lots of his opening keynote interview at the Variety Summit pushing for the likes of Microsoft and Xbox to get more involved in the content business.

“Xbox is a cable network, they just don’t know it,” he insisted. “They have eight-and-a-half million subscribers. Why aren’t they creating original content? They should go out and get a big heavyweight fight … or make a series of original shows for $100,000 an episode.”

The reluctance of Xbox, Microsoft, Google and the like to create original content, he said, was likely due to caution about taking on too much.

“They might have a concern that it’s not in their wheelhouse, and they might feel that there’s a difference between technology people and creative people,” he said. “I think everybody’s scared that they’re going to get sucked in and seduced by Hollywood, and they’re going to lose $100 million on a movie. 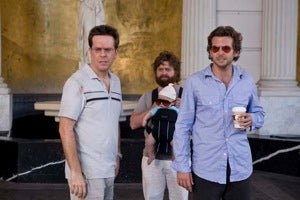 Roth also focused on a pair of statistics: two-thirds of all teenagers, he said, own cell phones, while three-quarters own iPods.

With teens that connected, he added, it’s crucial for entertainment companies to look to social media to reach their potential audience.

“Access is everything,” he said. “They’re completely open to be marketed and sold to … And three quarters of the time, you’re in contact with a potential buyer.”

The key, he said, comes in tapping into the social media communities that have coalesced around things like the “Twilight” books and movies. Roth has done that with the Seattle Sounders, a soccer team in which he is a majority owner, and one that allows an online community of fans to name the team and even make personnel decisions, voting every four years whether or not to retain or dismiss the general manager.

“Your audience can be told about something without having to spend $200,000 on a television spot,” he said.

For example: “‘The Hangover’ (above) and ‘District 9’ really are digital media movies. You can’t tell me that people came to see those movies in their second or third weeks because of a media buy. I guarantee you that the legs on those movies are because of interaction in the digital world.”

Speaking at the Variety panel “Technology – What Is the Big Picture?”, Lionsgate’s digital media president, Curt Mavis, described the company’s reaction to finding content from its films pop up all over YouTube. 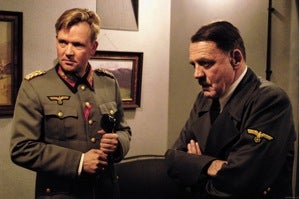 “It’s like Whack-a-Mole,” he laughed, comparing any attempt to stop the copyright infringement to the arcade game in which moles continually pop through holes.

So instead of using the YouTube service to identify and stop the use of Lionsgate content, he said, the company opted to let users know that Lionsgate is aware of the use, but to allow it as long as the clips are shorter than seven minutes.

“YouTube has 100 million people watching 30 million video clips a month,” he said. “It seemed absurd to try to shut that down. Let’s tap into it.”

For Mavis, the use of copyrighted content in forms like the parodies of “Downfall” (right) that have been sweeping the Internet for years is simply another form of promotion.

“With ‘Downfall,’ that movie has more people knowing about it now than if it had been around for 1,000 years,” he said.

The window between theatrical and DVD/Blu-Ray release didn’t just figure prominently in Roth’s presentation; it also occupied a big chunk of time in the Variety Summit conference “Hollywood, Finance and Strategy.”

“Windowing is really … hurting the ancillary business,” charged Blockbuster’s Neil Davis. “For a smaller film, you can’t tell me that that film needs to be in a theatrical window for 100 days.”

Producer Jonathan Fischer agreed that the shorter window would help maximize the effect of the publicity and marketing done for a film’s initial release: “being able to draft off that for the DVD would be great.” But he knew that theater owners would object to the plan, and that they’d object to the low boxoffice projections as a self-fulfilling prophecy.

“It’s a circular argument,” he said. “If you know the movie’s going to come out on DVD in 45 days, you won’t go in the first place,” he said. “So you’ve just killed the boxoffice right there.”

“Are you growing the pie, or are you just moving things around?” asked Mark DeBevoise, the senior vice president of digital media, business development and strategy at Starz Media. “I don’t think you’re creating more transactions by doing this – I just think you’re moving those transactions to the back end.”

And a significant problem, Fischer added, is that theater owners don’t want the window shortened for one movie, for fear that consumers will expect the same for subsequent films. 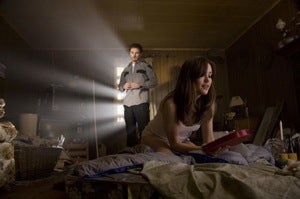 The same panelists also took up the issue of 3D, and once again found themselves divided. Producer Fischer, who had attended a presentation on the format with what he said was a prominent filmmaker who was excited by the technology, predicted a day in which all movies would be in 3D.

But the other panelists largely disagreed – and all thought that the format faced formidable obstacles before it will be adopted in the home.

“I think there will be 24 movies available in 3D by the end of the year, half of them from Disney,” said Blockbuster’s Davis.

At a panel entitled “The New Hollywood Equation,” Edemol USA vice president Jerry Kowal sounded a warning to companies who want to fall back on traditional ways of doing business.

“Disruption is happening,” he said. “You need to embrace that and become one of the disruptors, rather than being disrupted yourself.”