Five years after it’s prequel, “Sing 2” finally arrives in theaters just in time for Christmas. The first “Sing” opened in theaters in 2016, and the onset of the COVID pandemic delayed its sequel from December 25, 2020 to fill a slot left open by the corresponding pushback of movie musical adaptation “Wicked.”

“Sing 2” was originally slated for release on Christmas Day of 2020, but the movie was officially pushed back before COVID was a concern, when it was delayed to July 2, 2021. In April of 2020, Universal further delayed “Sing 2” to its current set release date, in hopes of making room for Illumination’s other big project, “Minions: The Rise of Gru,” but that movie was eventually delayed also due to obstacles in production.

But now “Sing 2” is finally here, and families everywhere may be wondering how to watch the sequel. Is it streaming or in theaters? Will it be streaming? We’ve got your answers below.

“Sing 2” was not available for streaming the day it released in theaters, but on Jan. 7, 2022, it became available to rent OnDemand with Vudu, Xfinity, YouTube TV, Apple TV and Prime Video. After making its cinematic run at the end of 2021, the film could still potentially stream on Peacock — starting in 2022, all Universal Pictures releases will be streaming on Peacock 45 days after they hit theaters. That has not been the case for Universal’s 2021 releases, however, and thus far only “Halloween Kills” was released on Peacock and in theaters on the same day. 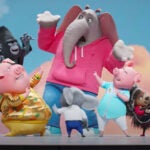 Also Read:
‘Sing 2:’ The Gang Is Back for a Life-Changing Mission in First Trailer (Video)

The hustling Buster Moon, a dreamer of a koala with grand plans for his local theater, returns in this anticipated sequel film, only this time the stakes are higher, the competition fiercer, and the soundtrack is even more robust. Moon’s crew have their eyes on the prize this time, which consists of a gig performing a brand new show for literal entertainment wolf Jimmy Crystal at his glamorous Crystal Tower Theater in Redshore City. The “Sing” gang returns, performing an elaborate rendition of “Alice in Wonderland” laced with instantly recognizable hit songs. But a couple larger-than-life obstacles stand in the way of their journey to fame: a disinterested talent scout who doesn’t think they have what it takes to make it in the big leagues, an intimidating boss (Crystal) to convince otherwise, and then the falsehood that Buster Moon has connections to reclusive rockstar Clay Calloway — who hasn’t performed in years since the death of his wife, despite the fact that Moon promises Crystal he’ll be performing with them. All kinds of animated antics set to a solid soundtrack — peppered with both classic hits as well as more recent smash singles — promise a very entertaining sequel film indeed.

The voices lent to the animated characters pack some star power in dialogue alone, but when these well-known voices move to the next level of singing, it becomes a fun guessing game of who voices who.

Behind Buster Moon is Matthew McConaughey. Powerhouse Tori Kelly belts out Meena the elephant’s ballads. Reese Witherspoon infuses superhero mother pig Rosita with her tireless energy. Nick Kroll voices hilarious and gregarious piggy power champion Gunter. Taron Egerton voices hard-working Johnny. Jennifer Saunders is Nana, a retired singer and performer who now owns Moon’s theater, saving it from actual rubble when some things went wrong in “Sing.” Clay Calloway, the long lost lion rockstar, is voiced by none other than lead singer of U2 himself, Bono. Garth Jennings, director of the “Sing” franchise, voices comedic Miss Crawly the lizard with a glass eye. Powerhouse porcupine Ash (Scarlett Johansson) is on her own in this films, and she comes in as a huge help with her fan-based knowledge of Clay Calloway. 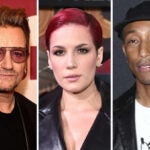 Other newcomers to the sequel include Bobby Canavale as Jimmy Crystal; Halsey as Crystal’s daughter Porsha; Chelsea Peretti as the talent recruiter dog Suki; Adam Buxton as tough dance teacher Klaus Kickenklober; Letitia Wright as the breakdancing cat Nooshy; Eric Andre as arrogant heartthrob Darius; and Pharrell Williams as the elephant Alfonso (Pharrell Williams). Additionally, filmmaker Wes Anderson has a voice cameo in the film, just like he did in the original “Sing” alongside directors Edgar Wright and Chris Renaud (“Despicable Me”), according to Collider.

Is the Original “Sing” Streaming?

“Sing” is available to stream on FuboTV.

What Is “Sing” About?

Before Buster Moon and his performers were big enough to travel to Redshore City and eventually book gigs in other major cities, they were individuals just trying to find ways to live their dreams of singing or playing music. Moon — who was strapped for cash at the time to keep the theater open and running — schemed up a way to encourage audiences through a singing competition. Rosita, Ash, Johnny, Gunther, and eventually Meena, with the persuasion from her mom and grandpa, audition for the show, and through the ups and downs of the rollercoaster that Moon runs, they somehow gather crowds to the shell of what once was the theater (due to an extravagant accident involving tanks full of glowing squid) and get noticed by their small town. Characters in the prequel that don’t return in the sequel include Mike the Sinatra-esque singing mouse (Seth MacFarlane) and Eddie (John C. Reilly). 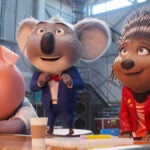