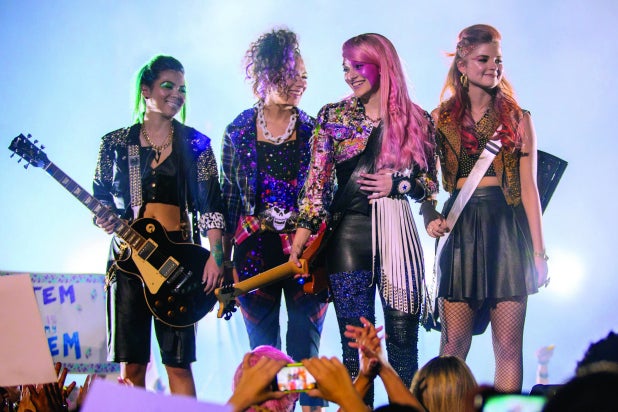 Fans were excited about “Jem and the Holograms,” a reboot of the popular 1980s cartoon, but it has left many of them feeling disappointed and upset as the original TV series seems to have been completely lost in the new film, critics say.

“If you’re a hard-core ‘Jem’ fan who’s still mad that Synergy is no longer a super-computer and that the rival band The Misfits are nowhere to be found (stick around after the credits, I’m just saying), you won’t be won over by this reimagining of the material,” TheWrap’s Alonso Duralde wrote in his review of the movie.

And other critics agree, saying that much of “the Jem they loved” is lost “under the movie’s achingly hip millennial trappings,” and “whatever high hopes we might have had for this latest exploitation of 1980s nostalgia are slowly ground away.”

While the film’s stars Aubrey Peeples, Stefanie Scott, Molly Ringwald, Aurora Perrineau and Hayley Kiyoko might be convincing for critics, the end result of the film is “shallow and lifeless,” giving it a negative score of 23 percent on Rotten Tomatoes. The box office results from its Thursday night previews echoed that, with “Jem” only making $34,000.

See eight of the most rotten reviews below.

“‘Jem’ attempts to update a property that’s been defunct and essentially forgotten since the late ’80s. Hardcore fans won’t find much of the Jem they loved under the movie’s achingly hip millennial trappings, while young newcomers will be left wondering what a robot has to do with a rock band.”

“There are a few sweet moments early in ‘Jem and the Holograms,‘ as we are reintroduced to the long-dormant characters from the three-decade-old animated series and see how they’ve been reimagined for a 2015 live-action film. But then the movie’s lumbering, overstuffed, unfocused plot shows up, and whatever high hopes we might have had for this latest exploitation of 1980s nostalgia are slowly ground away.”

“Director Jon Chu stretches ‘Jem’ to a ridiculous two hours, via endless amateur-musician YouTube clips. Anyone can be a star, they attest — and always be yourself! (Except when you’re Jem. I guess.) Fans of the cartoon should stick around for Lewis’ after-credits sequence, which introduces a dastardly rival band. It’s the movie’s best scene, setting up a sequel we’ll never see.”

“Director Jon M. Chu shrouds pop singer Jem — formerly a record company executive, now a mystery-solving suburban teen with a robot sidekick — behind celebrity testimonials and scads of non-original footage, most of it sourced from YouTube videos. Factor in a plot that involves wills, contracts, and a futuristic technology that is never actually shown, as well as a setting of generic real-estate catalog interiors and suspiciously small concert venues, and the result begins to look a bit like the Hasbro equivalent of ‘Atlas Shrugged, Part III.’ Its one saving grace is that Chu’s direction is so wildly inconsistent that it manages to produce a handful of genuinely gorgeous images alongside all of the cruddy ones.”

“Jem has lost her outrageousness and gained a robotic sidekick in an overlong, low-budget big-screen reboot of the 1980s toy-selling cartoon series. While ‘Jem and the Holograms’ may strike a chord with its target preteen audience, it certainly doesn’t accomplish that with memorable music. And ‘Jem’s’ going to have a tough time winning over those seeking a hit of shoulder pad and pink/”>pink hair nostalgia in this lifeless copy.”

“‘Jem and the Holograms’ is a top-notch example of a direct-to-DVD Disney movie. As a theatrical release … not so much. Director Jon M. Chu has turned the neon pink/”>pink of the original Saturday morning cartoon into a bland beige.”

“Jon Chu‘s ‘Jem and the Holograms': a shallow, lifeless semi-musical propped up by YouTube videos from fans who will surely be mortified to see what has been done with their favorite ’80s pop icon.”

“Sadly ‘Jem and the Holograms’ is not even a good version of the kind of movie it is attempting to be. It roars to life when its characters are singing their hearts out, but there are shockingly few ‘Jem and her band do their thing onstage’ moments. Like so many recent misguided ‘dark-and-gritty origin stories,’ ‘Jem and the Holograms’ spends the entire movie getting its characters to the point where they might, in a theoretical sequel, resemble the characters we know and love. And most importantly, it takes a cartoon that was originally about a group of women who unquestionably held power and turns it into a tale of a meek and weak-willed young woman who is arbitrarily given fame and holds zero agency except for that which is granted to her by the men in her life.”

“Jem and the Holograms” hit theaters on Friday, and is expected to make $4 million to $5 million its opening weekend.