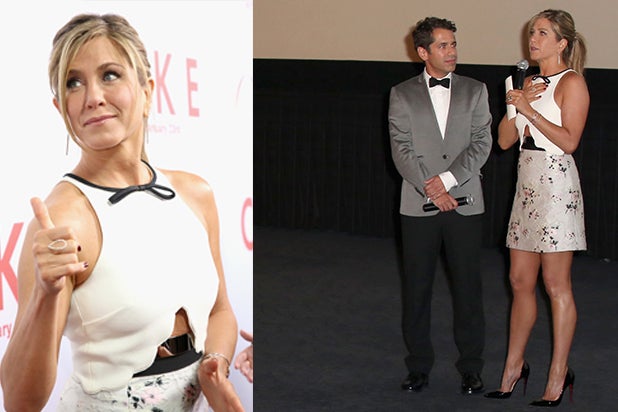 Aniston gives thumbs up to "Cake", and thanks director Dan Barnz inside the Arclight on Wednesday night. (Getty Images; Ari Perilstein/Getty Images)

“Lets get this party started!”

The occasion: the U.S. premiere of the Aniston-led drama about chronic pain, “Cake.”

After earning Critics Choice and SAG nominations as well this season, I asked Aniston if she planned to watch the Oscar nominations early Thursday after Wednesday night’s premiere and party, or just sleep through it and wake up to a binary result on her phone.

The crowd outside the Arclight. (Mikey Glazer)

See video: Jennifer Aniston on Why She Fought for ‘Cake’, Deglamorization of Women for Awards; Picks Proudest Roles

“I just put my phone on,” she told me of her nomination morning routine this season. “I usually have my ringer off … I’m told I’m not allowed to do that. My ringer will be on … so (you), don’t call me,” Aniston said before the screening, amidst screams from the crowd that had filled the Arclight plaza and hung over the second floor terrace to get a glimpse.

Ben and Daniel Barnz; Aniston’s producing partner Kristin Hahn, who Aniston described as “my friend of 25 years, my sister, my mother, my fairy godmother. You astound me and boy are you a kickass producer.”

“I hope I get an early call for sure,” Hahn said.

“We are going to leave our phone on and hope for great news,” producer Barnz said. “I can’t imagine we are actually going to be asleep,” director Barnz added.

“I’m waking up early,” Canton said. “I may not even go to sleep. I’m doing the right dance and the right chants,” the producer added.

Hahn called the experience of working with Canton, who is used to mega budgets having run both Warner Bros. and served as Chairman of Sony’s Columbia Pictures, “the funniest man in the business.” His email responses are usually one word, like a Canton haiku.”

But back to the drama that screened on Wednesday night.

“I just want to say thank you to (director) Daniel Barnz for trusting that I could do this and giving me a shot,” Aniston said in the pre-screening introductions. “I will forever be grateful to you.”

With the release timed to the additional publicity, Hahn parsed the theatrical release from the awards campaign. “Nobody’s overly attached to what happens tomorrow, but I think she deserves it,” Hahn told me on the carpet.

“Jen has a very healthy attitude about these things,” Hahn continued. “She’s been in the business a long time; made a lot of movies, has been through ups and downs, as you know. The stories run the gamut for her. So she is a very level-headed person, and I think she’ll sleep tonight.”

UPDATE, Thursday, January 15: The Academy did not nominate Aniston for “Best Actress”.