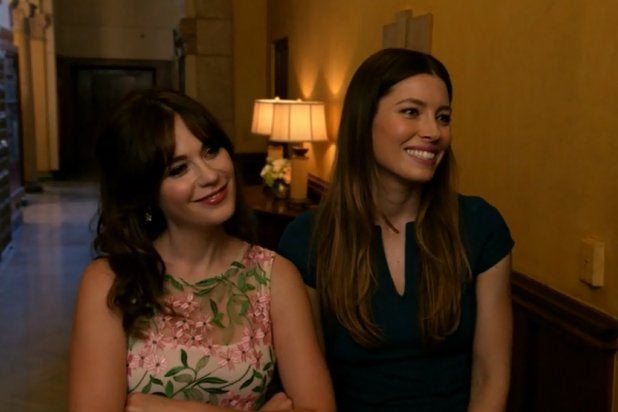 (Spoiler alert: Do not read on if you have not yet seen the Season 4 premiere of “New Girl” titled “The Last Wedding,” and the Season 3 premiere of “The Mindy Project” titled “We’re a Couple Now, Haters!”)

Call it a soft reboot, or at the least a focus shift for both of Fox’s returning comedies. “New Girl” and “The Mindy Project” kicked off their new seasons by pushing their central characters in opposite directions, and it worked perfectly for both shows.

Biel faced off against Zooey Deschanel‘s Jess for the lone single guy at a wedding, played by “Veep” star Reid Scott. The guys convinced Jess it was time to hook up with some random guy to help her get over Nick, because she needed it — and the viewers needed it.

Jess and Nick seemed destined for one another since the series premiere, but once it finally happened it was “Moonlighting” all over again. This match-up didn’t work, it dominated the bulk of last season and it nearly crippled the show creatively.

Thankfully, the writers figured it out and started making moves to undo the mess they had wrought. Based on the Season 4 premiere, “New Girl” is back on the solid footing that steered its first two seasons, and perhaps even a little stronger. Damon Wayans Jr. remains a welcome addition/return as Coach — he appeared in the pilot but had to quit the show due to his commitments to ABC’s “Happy Endings” — and they’ve finally settled on what role best suits Lamorne Morris’ Winston.

With Coach’s charisma and cool confidence back on the show, Winston is allowed to fully embrace his oddball “sad sack” side. Every great ensemble needs a weird character, and Winston would do well to push it even further into Lisa Kudrow (“Friends”) and Michael Richards (“Seinfeld”) territory. Everyone loves the wacky character.

Like “Friends,” the sexual tension between characters can be fun to play off of, but this is mainly a hangout show about a bunch of people who are funnier and have more interesting adventures than we do, and that’s why we want to tune in every week.

The show almost made a welcome effort to turn the spotlight back on Max Greenfield’s Schmidt in this premiere as well. After earning an Emmy nod for his performance in the show’s first season, it’s as if the creators forgot what a comedic powerhouse they had in Greenfield. He was relegated to background status for much of Season 3, and the show suffered for it.

It was also great to see Deschanel on the loose again. Her performances and antics felt restrained working opposite Johnson, because they had a natural chemistry. But Deschanel’s charm is in her awkwardness, and that works best played off of people who intimidate her or make her uncomfortable in some way.

Uncomfortable Jess is funny Jess, and Biel certainly made her uncomfortable. By way of introduction, Biel bluntly explained that she and Jess were in competition for the only eligible bachelor at the wedding. She then listed off an impressive resume, to which Jess responded with a goofy “vagina voice.”

By the end of the wedding, Jess had learned to embrace her awkward honesty, and Reid found himself unable to decide. But that only helped Jess and the rest of the gang make a decision of their own. They may not be going home with dates, but they’re not going home alone, either.

The single life isn’t bad so long as you have good friends and there’s fun to be had. Here’s hoping “New Girl” remembers that this is when it shines. If the end plan is to have Nick and Jess wind up together, then save it for the end. “Friends” took nearly a decade for David Schwimmer and to finally settle into one another. There’s no hurry. Let’s all just hang out for now.

After all of that, I’m now going to applaud “The Mindy Project” for doing the exact opposite, but that’s because “Mindy” never really found itself as a show about Mindy Kaling as a single young doctor. The show floundered creatively for two seasons and really only showed signs of life when Mindy and Messina’s Danny shared the screen.

At its heart, “The Mindy Project” is a romantic comedy. The weakest part of any romantic comedy is that part in the movie when the guy and girl who everyone knows are going to wind up together break up, usually over some minor occurrence that one or both of them blew out of proportion.

Mindy Kaling knows how to write a romantic comedy, but she struggles more with the rest. On “The Office,” where she served as both an actor and a writer, the entire ensemble was fleshed out, with side characters having well-rounded personalities that allowed them to carry scenes. This never came together on “Mindy,” which largely explains the cast revolving door the show has seen in its first two years.

Even in this third season premiere, the supporting cast remains mostly two-dimensional. Only Adam Pally’s character has any depth, and it’s the exact same depth he had on “Happy Endings,” because it’s basically the same character. Thank goodness he showed up, though, so Kaling and Messina would have someone interesting to interact with.

This isn’t necessarily a bad thing, so long as “Mindy” knows what kind of show it is and what stories it wants to tell. Its best moments come with Kaling, Messina and Pally, and so the show has understandably become razor-focused on them. All romantic comedies have the goofy buddy, so Pally’s performance fits the tradition.

A very successful premiere, “Mindy” established the different dynamics of the central couple in the narrative. Mindy never shuts up and Danny likes to keep his private life private, and especially if it involves his secret past as Diamond Dan, the male stripper.

Their relationship is about their polar opposite personalities, and it should be fun to see how things progress. Since bringing these characters together, the show has had more energy and been more consistently funny and touching, as if proving that this is the story Mindy Kaling wants to tell.

So while I was happy to see Nick and Jess break up on “New Girl,” I’m actually worried about what might happen if the same thing happens to Mindy and Danny. “New Girl” is a solid ensemble buddy comedy at its core, but “Mindy” is completely dependent on the central couple. They can get away with an on-and-off relationship, but the show needs to realize it has no identity outside of their relationship and plan accordingly.